At about 5:30 in the morning of Monday, January 9, 13 bodies were found in the city Zitácuaro, Michoacan.

Zitácuaro City is located in the eastern part of Michoacan, about 150 kilometers east of the capital city Morelia and the border with the State of Mexico. It is close to the popular tourist area where ​​the Monarch Butterfly winters.

According to municipal police, the individuals had been shot in the head, with their bodies “stacked and stripped” with “visible signs of torture”. All the victims were male and “semi-nude”. Three were minors.

Given that some were also found with messages written on paper cards, a hallmark of the drug wars, officials presume that the individuals fell victim to organized crime.

Officials have not yet revealed the content of the messages. However, they confirmed that the messages reflected threats against rival groups, and appeared to be part of the ongoing fight among criminal organizations for control of territory. 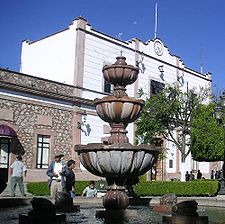 The bodies were found after neighbours alerted authorities to heavy truck activity. This suggests that the individuals may have been killed elsewhere and brought to the site. Authorities have yet to identify the dead.

The bodies were deposited at the edge of the ​​town’s urban area, near a road leading to the town of Tuzantla. Preliminary reports are that the bodies were piled in front of an Oxxo store and gas station near several schools in Colonia La Mangana. Oxxo is a popular Mexican store chain, akin to 7-11 in the United States and Canada.

Violence is not new to Zitácuaro. The town has been the scene of several battles between criminal groups, including an ambush that killed 12 federal agents on June 14, 2010.