Mexico’s Ministry of Health (Secretaría de Salud, or SSA) has confirmed that so far this year there have been 3,266 illnesses that have the characteristics of influenza.

Of these, there have been 637 laboratory-confirmed patients, with 10 deaths having been recorded. The big concern is that health units have reported that 90% of proven cases were A/H1N1, th enotorious "swine flu". This amounted to 573 cases and nine deaths. The tenth death has not yet been subtyped.

(To read more background on this story from a January 6 post in La politica es la politica, go here.)

The government claims there is no cause for undue alarm. During the first week of 2012, for example, for every thousand consultations for respiratory illness there were only seven patients with influenza-like symptoms.

This is far below the standard indicator to raise concern, which would be 20 per thousand.

Of more immediate concern was carbon monoxide poisoning.  Since the beginning of the cold season until January 20, 2012, there have been 37 deaths from “pneumonia and bronchopneumonia”; however, included in these numbers are deaths due carbon monoxide poisoning resulting from burning fuel for heating homes. Hypothermia is also included in these numbers.

Of these 37 deaths, a full 19 occurred in Chihuahua: 17 from carbon monoxide intoxication, one from hypothermia, and another from burns. Durango reported six deaths in total, Sonora had four, and Hidalgo and Baja California had two each. Coahuila, Guanajuato, Puebla and Nuevo Leon, each reported one case.

Authorities said the risk was due to sudden temperature changes. To tackle the problem, people are being advised to consume fruits and vegetables or supplements high in vitamin C and D, and to take plenty of fluids. 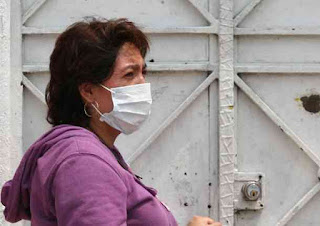 With the right precautions, she should make it through the flu season (Source: Notimex)

Despite the authorities’ assurance that the situation was under control, senator Javier Orozco Gómez from the PVEM (Green Party) called upon the Ministry of Health to implement immediate preventive actions, and not lose vigilance required to prevent a new outbreak of influenza A/H1N1 in the country.

Orozco Gómez said this because, despite the low number of outbreaks, he does not share the authorities confidence that they have averted a nationwide outbreak of the A/H1N1 virus.

"Faced with the flu, we should spare no preventive measures,” he said. “We should vaccinate, especially in states with high levels of marginalization, and where frosts have been reported. We also need permanent coordination between the health services of all 32 states.”

Orozco Gómez commented on the fluidity of the situation, noting that, according to published information, between the last week of December and early January the states with the highest number of reported cases are Puebla (68), Mexico City (28), the state of Veracruz (19) and the state of Mexico (15).

Though Orozco Gómez agreed that, from an epidemiological perspective, the country is not suffering from a pandemic, his main concern is that officials not be caught off guard.


Also, if you have read this far, perhaps you would support our efforts? We do this for free. Supporting La politica es la politica is easy - simply click on the "donate" button on the upper right-hand side of the page. We are talking small generosities, not big bucks. As a heads up, Pay Pal will insist that you use it if you are already on account. For direct credit card payment, you will then have to use a number and email that Pay Pal doesn't recognize in order to escape their benevolent grasp.
Posted by TimothyEWilson at 14:37