Members of drug groups such as those of Beltrán Leyva, Edgar Valdez Villarreal, (la Barbie) and La Familia have used the commercial zone of Santa Fe, located in western Mexico City, as a meeting place, to shop or for lodgings. (Where a car was burned and two bodies and two heads were abandoned yesterday in front of a major, hi-end mall.)  Several arrests have been made by federal authorities in restaurants, hotels and shops that are located in the place where, a few decades ago, there were garbage dumps and sand and gravel pits.

In October 2008, the Colombian drug kingpin, Teodoro Mauricio Restrepo, who served as liaison to the Beltran Leyva organization, used the mall parking garage to transport business partners and service providers from there to his mansion in Desierto de Los Leones, where he held his parties and had exotic animals to be maintained.

In February 2009, at the mall where the incident occurred yesterday, Gerardo Gonzalez Benavides, known as "Tony the Lie," who is Edgar Valdez Villarreal's ('la Barbie') cousin, was arrested. He allegedly controlled drug sales in Tultitlan and Cuautitlan, in the state of Mexico.

Similarly, on April 14, 2010 Hilario López Morales, 'the Cat', was captured in one of the restaurants in Santa Fe. He was identified by federal authorities as being in charge of La Familia cartel operations in Zitacuaro, Michoacan. 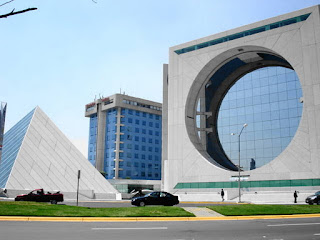 The violence is coming close to where the rich play

Also in November 2010 in the Central District hotel, federal authorities arrested five members of what is known as the Independent Acapulco Cartel, an organization that la Barbie created after the death of Arturo Beltran Leyva in December 2009. Among those arrested was Carlos Montemayor Gonzalez, father of Edgar Valdez Villarreal."

During his working tour of the United States, Mexico's Public Safety Secretary, Genaro Garcia Luna, pointed out to high ranking officials of the administration of Barack Obama the professionalism and international standards of research and intelligence achieved by the Federal Police under the administration of President Felipe Calderon.

He met in Washington with the United States attorney general, Eric Holder, the drug czar, Gil Kerlikowske, the director of the DEA, Michele Leonhart, and FBI chief Robert Mueller, who also addressed issues such as trafficking drugs, border security and money laundering.

Garcia Luna said that at the beginning of this administration, in Mexico there were no police institutions with the capacity to deal with a complex phenomenon such as organized crime, which is now transnational. This  required the design and implementation of a strategy to transform police departments that began with the  building an authentic Federal Police. He gave an accounting of the achievements of the Federal Police against the drug cartels, with it results in seizures of drugs, weapons and the capture of kidnappers.

U.S. authorities stated that they recognized the progress of the Mexican government in fighting crime. They pledged to redouble efforts to improve bilateral cooperation to achieve a more effective fight against transnational organized crime, as it is a complex phenomenon not unique to Mexico.

Of course, the ambassador says nothing about U.S. responsibility in creating the drug violence. The U.S. government's theme of "shared responsibility" with Mexico for solving the violence seems to imply that the responsibility is equal. It is hardly equal. Mexico's major challenge is establishing the rule of law--a functioning police and justice system. But it is the U.S.'s prohibition of regulated, legal drug sale and consumption that starts the violence ball rolling by fueling the cartels and their competition. About that, Mexico can do nothing.

The U.S. ambassador to Mexico, Anthony Wayne, said that he is working with the government of Felipe Calderón and civil society groups to protect journalists and human rights defenders. In support of this effort, he will sign an agreement with Freedom House and allocate 5 million dollars over four years. ...  He stressed that the goal will be to improve the skills of civil society to monitor the government's efforts in its task of providing emergency tools and support to protect journalists at risk.

On the other hand, he stressed that neither country alone can solve the drug problem. "We must work together. We share responsibility to combat drug-related violence," he said. ..."As Americans we must be honest about that responsibility and the ways in which our consumption of drugs and the illicit flow of weapons and money into Mexico contribute to the enormous challenge we both face," he added.

He added that last month the promise of President Barack Obama to deliver to Mexico $500 million in equipment and training was fulfilled in accord with the Merida Initiative, for a total of nearly 900 million overall. He expressed confidence that the commitment to deliver one billion, 400 million dollars would be met or exceeded.

Ending a three-year slump, remittances to Mexico are finally on the upswing, thanks to an improving U.S. job market.

Analysts expect that money sent home last year by Mexicans living abroad, most of them residing in the United States, will top $23 billion when Mexico's central bank releases annual figures this month. Although still below the peak of $26 billion in 2007, that would be a solid 8 percent increase over 2010.

Former general Otto Perez Molina takes office as Guatemala's new president Saturday with a top priority of ending a long-standing U.S. ban on military aid imposed over concerns about abuses during the Central American country's 36-year civil war. Perez, who was a top military official during the war, has long insisted there were no massacres, human rights violations or genocide in a conflict that killed 200,000 civilians, mostly Mayan Indians.

But he won the presidency campaigning on a pledge to crack down on soaring crime, including one of the highest murder rates in the Western Hemisphere, and he will need U.S. help to battle the Mexican drug gangs that have overrun Guatemala. Close advisers say he supports meeting the conditions set by various U.S. congressional appropriations acts for restoring aid that was first eliminated in 1978 halfway through the civil war.

The Mexican government updated its drug war death toll on Wednesday, reporting that 47,515 people had been killed in drug-related violence since President Felipe Calderón began a military assault on criminal cartels in late 2006.

Wednesday’s limited data release (will not) silence the increasingly loud call for better, more transparent government record keeping. The Mexican government has failed to create the tracking system it needs to understand criminal trends and improve security, experts say, even as it has become more secretive with the limited information it has.