This year is set to be a tough one for the flu virus, and recent events in Mexico are cause for some concern for residents throughout the Americas.

The Health Sector in Tlaxcala, Mexico, north of Puebla to the east of Mexico City,  has reported the death of one person from the A/H1N1 influenza virus. The death occurred in December in a state hospital.

The A/H1N1 virus is a subtype of influenza A virus; it was the most common flu strain in 2009, when the World Health Organization (WHO) declared a pandemic that originated in Mexico. Often called “swine flu” by the public media, it is spread by pigs, as opposed to the “bird” or “avian” flu, which is spread by fowl, mostly domestic chickens.

In 2009 the A/H1N1 pandemic caused widespread concern in Mexico, where an estimated 159 people died. Worldwide, it was estimated to have caused about 17,000 deaths by the start of 2010. By August 10, 2010, the World Health Organization declared the pandemic over. Now, this most recent death in Mexico has raised concerns that 2012 could be a tough year.

In fact, the WHO has been on top of this since earlier in 2011. On April 26th, 2011, an H1N1 pandemic preparedness alert was issued by the WHO for the Americas, with affected areas including the Chihuahua region of Mexico, where its severity and “work load” (i.e. viral activity in the body) have been high.

Concern remains elevated because the current vaccine targets this virus, yet may have been losing effectiveness in 2011.

In the case of the recently confirmed death in Mexico, the head of the Ministry of Health (Secretaría de Salud), Jesus Fragoso Bernal, confirmed that the Instituto Nacional de Referencia Epidemiológica (InDRE), Mexico’s equivalent of the US’s Centers for Disease Control and Prevention, had confirmed that the submitted sample tested positive for A/H1N1.
The death was recorded in mid-December, but it was only yesterday (Thursday, January 5), that the state Health Department received official notification from the laboratory. In explaining the delay in confirmation, Fragoso Bernal said that the case had been “kept in reserve” at InDRE in order to verify that the death was indeed from influenza.

Fragoso Bernal also noted that the individual had complicating risk factors that increased the likelihood he would succumb to the disease, most notably a high body mass index which resulted in morbid obesity.

Surveillance to combat the H1N1 influenza has been upped in many areas in Mexico due to the presence of positive cases in Michoacan, Mexico State and Guanajuato.

Meanwhile in Hidalgo, officials from the state Health Department and the Directorate General of Civil Protection said that so far there have been two deaths associated with high fevers. They denied that these deaths were due to A/H1N1, though it appears that InDRE has not conducted any tests specific to these deaths. 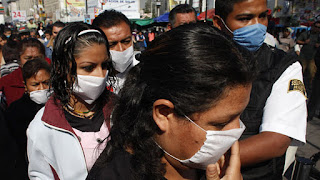 Officials in Hidalgo further reported that in 2011 the state saw 19 cases of seasonal flu, but none of these were A/H1N1. As a precaution, they reminded citizens to avoid igniting wood or charcoal indoors, to wear warm clothing, to be careful with children and the elderly, and to consume vegetables and fruits with vitamin C.

The state of Querétaro has responded with a mass vaccination campaign against A/H1N1 – it has ordered 450,000 doses of the vaccine.  Officials also said that they planned to send 30% more samples to InDRE for verification.

To date, the state government in Querétaro has administered 158,000 doses of the vaccine. It has 5,000 doses of medication in reserve for treatment.

Officials are concerned because of the significant flow of people between neighbouring Michoacán and Guanajuato, which have already had people testing positive for A/H1N1. At present, however, there have been no positive test cases in Querétaro.

Mexico’s Ministry of Health has said that there were 747 cases of influenza in 2011, with some increases over the winter season, particularly in the past three weeks. Of these, 200 were A/H1N1, but there was no imminent threat of a pandemic.

Overall, 2011 saw 38 deaths due to influenza, with half of these deaths being attributed A/H1N1. Officials noted that since the pandemic of 2009 the A/H1N1 strain had become part of the seasonal influenza reality throughout the world and not only in Mexico.

Back in 2009, Mexican authorities were forced to close all schools in Mexico City and central Mexico in response to the A/H1N1 pandemic. The country reported many hundreds of human cases of swine flu. Though in the end "only" 159 people died of A/H1N1 – far more than the estimated 19 who have succumbed to A/H1N1 so far this season – the country was gripped in panic.

At the time it was determined that approximately 80% of the virus was highly related to a North American body of swine flu that had been known of for a number of years. However, about 20% was determined to come from a Eurasian variety of swine flu first seen in Thailand. It was this recombination that was completely new.

Canadian and US authorities on alert

On January 1st 2012 the Canadian Food Inspection Agency officially urged pig farmers, farm workers – and even people planning to visit a swine farm –  to get a flu shot in order to reduce the risk of transmission between livestock and humans.

As well, the Canadian Swine Health Board, which has no legal authority to require vaccinations, has urged producers and farm workers to get the vaccine.

Canada has reason to be concerned: during the 2009 pandemic, the A/H1N1 virus killed 56 people in the western province of British Columbia. And Canadian authorities believe that a farm worker who came to Canada from Mexico likely infected a swine herd in Alberta in 2009.

Several similar incidents have been reported in the US. Worryingly, at the end of 2011 the US state of Indiana confirmed 19 H1N1 flu cases, and expressed concern that some could be a variant of the A/H1N1 swine flu.

According to the CDC, so far this season in the United States eleven children and one adult in five states have been infected by the new variant, with three hospitalized. All of the individuals have recovered.

The strain has been detected in Indiana, Iowa, Maine, Pennsylvania and West Virginia. Of these, at least six reported no recent exposure to pigs, suggesting "limited human-to-human transmission."

During the A/H1N1 pandemic in 2009, China and Russia closed their markets to U.S. pork. Industry revenue was estimated to have fallen by nearly $2.2 billion in the last eight months of 2009.