When I first travelled to Mexico in the mid-1980s two things struck me: the contempt of the rich toward the poor; and the lack of representation of the typical, dark-skinned Mexican in television news shows, advertisements, and dramas.

It was bizarre. One could walk through Chapultepec Park on a Sunday surrounded by a sea of relaxed people, the majority being descendants of Mexico’s indigenous civilizations, with perhaps some Iberian blood mixed in, and then go home, switch on the TV, and be told that, in effect, Mexico was populated exclusively by descendants of Europeans. (Apparently, according to Televisa, it still is).

Then, out to dinner at the then-swanky Zona Rosa, it was common to see wealthy, light-skinned Mexicans on patios, or standing around having a smoke, as poverty-stricken children, expert at working their pathos, pled for a few pesos. Yes, the mothers may have put them up to it, and yes, random charity may not solve poverty, but it was the profound and casual indifference of these men that struck me as strange. For them, this was normal. This was simply the way the world was.

For the advertisers and television producers there was an economic argument, of sorts, to be made for their approach, though it was pretty weak. Given Mexico’s history of racism and social injustice, the whiter the skin, the greater the social advantage, and therefore it would make more sense to target a consumer with deep pockets.

But of course it only served to internalize racism. It doesn’t matter how many statues you put up to Benito Juárez, a Zapotec who became president in the mid-19th century. It doesn’t matter how much ink is spilled and how many fiestas there are celebrating the “grito”, or call of independence, made famous by the revolutionary Miguel Hidalgo, when Mexico fought off the Spanish colonial government. The truth is, Mexico has deeply internalized the colonial, race- and class-based experience.

That makes the problem a very, very tough nut to crack. One easy way out is to replace one demon for another, so that the evil Spanish are now the evil Americans. But, without having to defend the often very bad behaviour of either foreign power, I think we can agree that the problem clearly resides within Mexico itself.

Now it is bubbling to the surface. PRI candidate Enrique Peña Nieto recently got into hot water for not knowing the price of tortillas or the minimum wage, and then compounded the blunder by saying he wasn’t the “woman of the house”. His daughter retweeted a comment disparaging his detractors as “proles”. (This clueless man is also promising universal healthcare, social security, and unemployment benefits for all – only a fool would believe him).

And earlier last year, one of his potential PAN presidential rivals, Ernesto Cordero, claimed that a monthly income of 6,000 pesos (US$430) could pay for a family home, a car and private education.

The PRD’s centre-left candidate Andres Manuel Lopez Obrador, who ran for office on "poor first" campaigns in 2006 and 2012, certainly gets it, but he is running an uphill race against hostile media.

Whoever navigates his or her way through this minefield will – perhaps deservedly – take on the mantel of president elect on July 1st, 2012.

Things have not changed that much over the years.  A video that went viral last month revealed how ingrained racist attitudes were amongst children of all backgrounds. It explains why, when they grow up, even the darker-skinned would rather buy products pushed by light-skinned people. 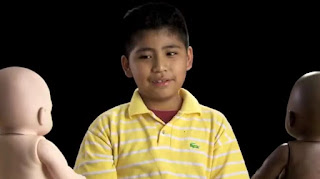 He and his friends prefer the white doll

Last year also saw the famed “Ladies of Polanco” video, in which two intoxicated women loudly berated a traffic cop who dared stop them in Mexico City's upscale Polanco neighbourhood. And, most recently, a video was released of security camera footage in which wealthy store owner Miguel Sacal physically abuses a building attendant for not leaving his post and changing the tire on Sacal’s Porsche. This isn’t the first time Snr. Sacal has had one of his outbursts caught on camera, as can be seen from this incident in 2007.

There is something powerful about all three videos, and that is the extent to which racism is internalized. In the video with the dolls, even the brown children perceived the white doll to be “better” – not only better looking, but of higher character and more trustworthy. This partly explains why the poorly paid police officer and building attendant didn’t fight back, and why no-one came to their aid.

The language is also telling. In both the Polanco and security camera videos the white, wealthy, and privileged individuals rain down unprintable vulgarities that berate the darker-skinned workers with racial epithets, as well as belittling comments about their being poorly paid and lazy.

One ripple in the parking attendant attack is that the abuser, Miguel Sacal, is Jewish. The Central Committee of the Jewish Community of Mexico has denounced Sacal’s behaviour. In a statement, the Jewish community declared:

“The Jewish Community of Mexico denounces this type of attitude and behavior on the part of any person, for being violent, arrogant and discriminatory, while also manifesting that the behavior of individuals should not be attributed generally to any one group in society.”

The last part of that quote is telling. It reveals concern that, in effect, Snr. Sacal could suffer from racism as a result of having been seen as a racist. Suffice to say, Mexico has a long way to go before it can claim serious progress on solving social inequality.

If you read the message boards in Mexico, a lot of the comments are revealing. The Polanco women behaved badly because they were nouveau riche, some argue – one of the women, Azalia Ojeda, is an actress and alumna of the "Big Brother Mexico" television show – and the old-school elite would never have behaved that way.

In that inverted logic, social mobility is itself the problem. Some commentators have blamed “feminism” which...well, is too stupid to deserve further comment.

The PAN have had the wrong approach

In terms of economic inequality, it is clear that the PAN government of Felipe Calderon has been a failure. During his five years in office the number of Mexicans living on 2,100 pesos ($150) a month or less jumped from 45.5 million to almost 58 million.

To avoid this ugly reality, in 2008 the PAN altered the official definition of poverty, magically removing millions from the official tally.

But even that didn’t work. In fact, in Mexico the number of poor rose by more than 3 million to 52 million between 2008 and 2010, with the country’s wealthiest 10% earning 27 times what the bottom tenth makes on average.

Worse, approximately 47 million of its 112.7 million of Mexico’s people live in dire poverty, even though the country is home to the world's richest man, Carlos Slim.