Mexican students do not carry AK-47s to demonstrations

The head of the National Commission on Human Rights in Mexico (Comisión Nacional de los Derechos Humanos, or CNDH), Raul Plascencia, has indicated that the violent confrontation between students and police that occurred on a highway outside Chilpancingo, Guerrero, on December 12, 2011, showed strong indications of human rights violations on the part of the police.

During the confrontation, in which demonstrating students shut down the Acapulco to Mexico City highway to protest administrative and educational issues, two normal school (teacher’s college) students from Ayotzinapa were shot dead. A gas station attendant who attempted to put out a conflagration at the scene, and who has now become something of a folk hero, died later after having suffered severe burns. 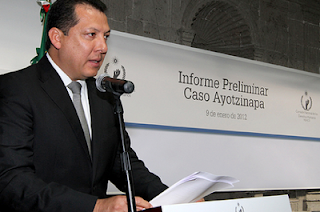 Raul has more work to do

During the presentation of the preliminary report on the case Ayotzinapa, the human rights ombudsman presented something akin to a statement of facts.

At approximately 11:30 am on December 12, the CNDH reports that students began to exit buses with placards demanding that the governor of Guerrero improve the operating conditions of their school, and that he promise not to close it. A half an hour later, federal police arrived, followed by state police, who began to fire tear gas.

It was the federal police who fired the first shots in the air to disperse the students. This resulted in approximately 300 students scattering in all directions. Some students reported that federal police, carrying rifles, fired into the air around 12:10.  Video evidence indicates that at that time plain-clothes, armed elements of the state police arrived.

The firing then began directly at protesters and stopped at 12:35. This means that for 25 minutes the police were firing indiscriminately.

When it was over, lying shot on the asphalt were Jorge Alexis Herrera Pino and Gabriel Echeverría de Jesús, 19 and 20 years old, respectively, both sons of peasants and students of the normal school. The two young men succumbed to their injuries. Three others were wounded.

The CNDH did not offer ballistics evidence, but did say that the shots came from the front, where witnesses, as well as video evidence, indicate the police were shooting from.

24 people were arbitrarily arrested. Among these, one student was tortured and at least 15 others suffered “inhuman, cruel, and degrading treatment.” Several videos show the police violently attacking some students. Of the 24 detainees – 23 men and one woman – only nine were members of the normal school. The rest were bystanders. The next day at noon 23 of the 24 detainees were released.

It was the last detained student, Gerardo Torres Pérez, who was tortured by the police. He was stripped, beaten in his ribs, and forced to say that he was carrying an AK-47 during the demonstration. Police then took him to a vacant lot in Zumpango where they forced him to shoot a gun. He was given provisional release on the afternoon of the 13th.

Now, if only the  Associated Press would retract their story. Want to see how much damage false reporting can do? Just Google "Mexican police: Weapons found at protest site".

The CNDH is promising further investigation in order to push for the prosecution and punishment of those involved. While they are at it, they should find out who set fire to the gas station by the highway, as by some accounts it was this event that provided a pretext for opening fire on the students.

Plascencia noted that some statements made by the governor, as well as by the student demonstrators, were contradicted by video evidence.