It’s dangerous to be a student in Mexico


Mexico is a young country. Usually, that is cause for optimism. But Mexico's youth is being used as fodder for a brutal drug war, caught between the cartels and the state’s repressive response. Being a student provides little cover.

Readers of this blog have been following the story of the normal (teacher’s college) students in Guerrero, two of whom were shot dead on December 12th. Whatever one thinks of their cause, one thing is certain: they were unarmed, and did not deserve to be shot in cold blood by the police.

Now, if only the Associated Press (AP) would retract the story by Mark Stevenson, "Mexican police: Weapons found at protest site", we could make some headway (Google it, if you want to see how much damage misinformation can do).

In fact, perhaps the AP should ask the Mexican authorities for an explanation, and be less hasty in the future to file stories from such suspect sources. This includes the accusation of gasoline bombs, given that the fire at the gas station during the demonstration caused the death of the attendant, Gonzalo Rivas Camara, and may have been used as a pretext to open fire.

As we know now, one of the students, Gerardo Torres Pérez, was tortured and then framed by the police. He was stripped, beaten in the ribs, and forced to say that he was carrying an AK-47 at the demonstration.

And why an AK-47? Because, as the police told AP, that is what the drug gangs use, and not the cops. So, students at a teachers college that is part of a long, agrarian/socialist tradition in Mexico, and that are troublemakers to many, could now be painted as truly dangerous criminals. 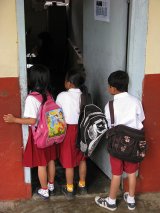 They are growing up in a dangerous world

Meanwhile, if students aren’t being killed by the police, they are being taken out by the drug gangs themselves. On the afternoon of Monday January 9th three young men, apparently students at the Colegio de Bachilleres de Ecuandureo, were killed in a park in Yurécuaro, Michoacan, only a few meters from the border with the state of Jalisco.

The three men died at 3:40 p.m. as they were sitting in a small park near the Aurrerá grocery store on the outskirts of Yurécuaro. This is only steps away from the bridge that leads to the municipality of La Rivera, Jalisco.

This appears to have been a targeted assassination. The young men, who were between the ages of 18 and 21, were shot to death by a group of men armed with assault rifles and other large calibre weapons.

At first, reports said that there was a shootout. But now it appears that the three students were unarmed. They were not "Ni-Nis" - those young Mexicans without work or study who often get drawn into crime.

As well, on Monday, January 9, students from Tecnológico de Monterrey (ITESM) protested during a visit by president Felipe Calderon to the northern city of Monterrey. They wanted clarification regarding the death of two students, which occurred during a clash with soldiers in March, 2010.

During the peaceful protest the students placed two candy skulls to represent the deceased. The two memorialized students, who had been attending ITESM on a scholarship, were shot to death at the entrance of their school, on Calle Luis Elizondo, early in the morning of March 18, 2010. They were caught in the crossfire between the military and a drug gang.

There was a certain irony to the protest. Inside the school the president was promoting a student loan program that will benefit 23,000 graduate and undergraduate students. The beneficiaries of the program will pay a fixed interest rate of 10% at 15 years, six months after completing their studies.

Assuming they live that long. In Guadalajara last month four students and a parent were killed when they visited the Guadalajara Students Federation, purportedly to talk down dues charged to run food stalls.