At least ten bodies have been discovered in a hidden grave in Durango, Mexico.
The State Attorney's Office reported that the bodies were located in the Ejido Cristóbal Colón (Christopher Columbus Ejido) by units of the Mexican military (SEDENA).  The remains have been removed in order to undergo medical examination through DNA samples and dental records, among other methods such as the presence of tattoos or scars.

Officials are now attempting to determine the identity of the individuals through DNA samples and dental records, among other methods (foto, below, from Milenio). 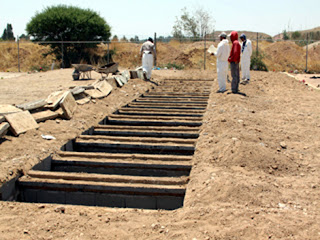 Ejido land is common in Mexico, though usually in rural areas. It is land shared by a community, much as was the case before contact with Europeans. Ejido land is registered with the National Agrarian Registry (Registro Agrario National), and is also common among indigenous communities. In 1991 the president of Mexico, Carlos Salinas de Gortari, eliminated the constitutional right to ejidos, citing the "low productivity" of communally owned land.

Ejido Cristóbal Colón is in the municipality of Durango, which also serves as capital of the State of Durango. It has 269 residents.

Local resident said they have lived in fear for the past few weeks due to the smell coming from the area, and had refrained form sending their children to school.