Now that five bodies have been found buried in clandestine graves in the yard of the Federation of Guadalajara Students (FEG) headquarters, the question remains: will anyone be brought to justice?

Reacting to the news, the Governor of Jalisco, Emilio González Márquez, announced that the government will investigate the murders to the fullest extent and, if it is found that the FEG operated as a criminal organization, it "would have to answer before the law".

The story broke last week with the University of Guadalajara expressing concern that five people had gone missing: three preparatory school students, a university student, and his father.

It turned out all five had gone to the student union to discuss fees charged to run churros (deep fried and sugared dough) stands on grounds surrounding the University and preparatory schools. The father ran a number of these stands, and apparently was concerned about the rising fees. In effect, the FEG seems to have been running a protection racket, extorting money from small-scale vendors.

By Thursday, three of the high school students – two aged 16, and one aged 17 – were found buried at the FEG headquarters. They had been stabbed to death. On Friday, the vendor, Armando Gomez, 56, and his son Ismael, 26, were found in another grave at the same site. They had been shot in the head.

The payment structure known as derecho de piso, a system of dues that confer “rights” to conduct business, are well-established forms of casual extortion in Mexico. Threats of violence can lurk behind the system, but in recent years, as Mexico’s war on drugs has created instability among criminal networks, violence has filtered into what might have otherwise been more stable relationships.

Marco Antonio Cortes (below), an official at the University of Guadalajara, stated in an interview that he believes the FEG is responsible for the killings. He claimed that the murders were "part of joint attacks that the federation has done against the students" and further stated that FEG "dedicates itself to extorting people who support themselves with hard work, dedicates itself to harassing students at every level. It's capable of committing this kind of brutality". 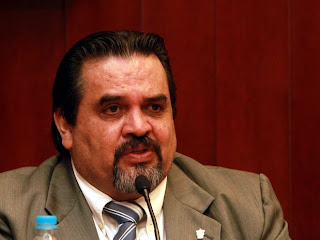 As well, Ruth Padilla, the Director of Education at the University of Guadalajara, has said that there have been complaints of FEG extortion and related crimes.

For decades the FEG has been allied with the Institutional Revolutionary Party (PRI), which ruled Mexico for 71 years before losing the presidency in 2000. (In 2009, the PRI re-gained plurality control of Mexican congress, and it is poised to regain the presidency in 2012).

For its part, the FEG has denied any involvement, claiming that it will work with authorities to help solve the case. The head of the student group, Israel Mariscal, has asserted that the FEG, “as an institution”, has no connection to the crimes. In this YouTube video Mariscal claims that the FEG supports students; he cannot say how many vendors are affiliated with the FEG, claims that the leadership is in transition, and says that the FEG has no system of derecho de piso. He has said that “if there’s some case of extortion, they should report it,” adding that “there’s a vendors’ association (and) the FEG offers them legal counselling and medical consultations at a lower cost.”

At present a guard at FEG’s offices identified by the alias “El tatuado” (the tattooed) is a suspect in the killings. Mariscal has said that the man is not a member of the student group.

Specifically regarding the allegations of extortion made ​​ against the FEG, Mariscal Quezada, said:

"I ​​have no doubt and there is someone who, abusing the good faith of the merchants and the activities we have together, dares to do this type of behavior.”

Given the amount of physical evidence – authorities said a handgun, several shell casings and traces of blood were discovered at the headquarters of the FEG – there should be ample opportunity to solve this case. It seems apparent that the FEG, which has been accused of involvement in previous violent incidents, will be central to solving the crime. If they participate fully in the investigation, as promised by Mariscal Quezada, then it might provide an opportunity to clean out the organization. The challenge of course, is that differing levels of corruption, and threats of further violence, may make this difficult, if not impossible.