Awaiting identification of Aguirre’s “outside elements”

Eleven police officers have been remanded to the federal Attorney General's Office (PGR) as the preliminary investigation opened into the murder of two student teachers on Monday, December 12, during a demonstration on a highway near Chilpancingo, Mexico. 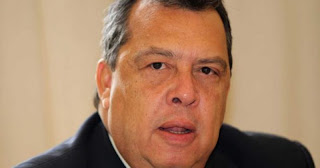 Governor Angel Aguirre Rivero was responding to a request from Mexico’s federal Attorney General Marisela Morales; he agreed that the PRG should take over the case to ensure there is no impunity.

The officers were transferred from holding cells to the PRG by pick-up truck. It is now up to the PRG to make a preliminary determination as to the responsibility of the agents.

The officers were identified in photographs and videos taken during the shootings, in which two students from a Normal Rural School in Ayotzinapa were killed as the authorities attempted to clear a demonstration on the Mexico City to Acapulco highway. Mexico's Normal Rural Schools are publicly funded schools that train teachers to serve rural communities.

Aguirre has also dismissed state Attorney General Alberto Lopez Rosas and the police chief and deputy police chief of Guerrero, Ramon Almonte Borja and Ramon Arreola, respectively. However, he has refused to resign himself, claiming that there are outsiders who are keen to destabilize his government.

He did not specify the alleged outside source of the attacks, reiterating instead that external interests wanted to strike a "political blow" to his administration.

The students were protesting to demand that Aguirre meet with them – something he had apparently delayed numerous times (see summary, below, for more details) – in order to resume classes at the teacher’s college in Ayotzinapa. Professors at the college had walked off the job to demand better pay and working conditions.

In a press conference Aguirre insisted that since assuming office on April 1st he has supported the Normal School by increasing the food subsidy from ten pesos to 50 pesos a day, as well as offering computers to those who participate in literacy campaigns.

"I was appointed for four years and seven months,” asserted Aguirre, a member of the center-left Party of the Democratic Revolution (PRD), adding that he had broken no law. However, he acknowledged that elements of the state police forces had no clear mandate to arrive at the student demonstration with weapons. Further, as a partial admission of state culpability, he said that survivors and relatives of the injured will be compensated.

The demonstrators held their own press conference on Tuesday the 23rd. They called for the dismissal of the two officials who were subsequently fired. They also demanded that Aguirre be impeached.

A total of 24 people were arrested during the conflict, although most were not found to have any connection to the violence, and were later released.

Juan Alarcón Hernández, head of the Commission for the Defense of Human Rights of the State of Guerrero, condemned the aggression, and said that he would be working with the National Commission on Human Rights to investigate the case.

Two suspects remain in detention. One, still unnamed, is being held for throwing a Molotov cocktail at a gas station and setting off the violence. The other, Gerardo Santiago Peña, a 19-year-old from Acapulco, was arrested for firing several shots from an AK-47 assault rifle.

If these are the “outside elements” Aguirre refers too, one wonders what their motivation could be. Hopefully, the ongoing investigation will come up with some answers.

For its part, Amnesty International on Tuesday demanded that Mexican authorities launch a “full, independent investigation” into the students’ deaths, saying that “the evidence that has so far come to light raises serious concern about policing of public order disturbances, resulting in serious human rights violations.”

More details of the conflict have emerged. As reported by the La Jornada and translated by Kristin Bricker, on Monday December 12 about 500 students from the Normal School  Raúl Isidro Burgos, a rural teaching school, arrived in buses, supported by 26 indigenous people from the Peasant Organization of the Tecoanapa Municipality, and another 20 from the organization Xanii Tsavvi ("Mixtec Dream").

They then closed the main highway between Mexico City and Acapulco to press their demands, the most significant of which was to meet with Governor Angel Aguirre Rivero, whom they claimed had  stood them up four times.

Other demands included: remove Eugenio Hernández García as school director; increase the class size from 140 to 170 students for the 2011-2012 freshman class; and allow students with a 70% average to be permitted to take the admission exam.

Shortly after the blockade began, at least 300 officers of the federal and state police arrived. At a later point these were supported by agents from the attorney general's office.

On the bridge over Huacapa River Dozens of state police, many in plainclothes, led by deputy police Ramon Arreola – since dismissed –  were positioned about 50 meters away. Arreola reportedly yelled  "Let's go, cabrones!" to incite his officers to confront the students.  Several agents fired their guns.

The students were attacked on two flanks, from the north and the south, from both sides of the highway, and from the Huacapa River bridge. One group of students attempted to take cover in one of the buses. Another attempted to repel the police with bottle rockets and stones, but they didn't succeed – on the contrary, the gunfire intensified.  The bus windows were shattered and the side panels were pocked with bullet holes.

Drivers of cars, busses, and trucks who witnessed the incident from both lanes fled to protect themselves from the gunfire.

At the time police also detained Eric Escobar, a reporter with the Chilpancingo weekly Trinchera, whom they beat in the face and body and then later released.