Two municipal police officers in Acapulco have been removed from duty after having robbed a Canadian tourist, according to the city’s mayor, Manuel Añorve Baños. 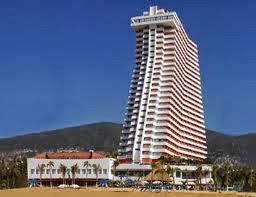 The incident occured near the Crowne Plaza, seen here

Local business owners reported that this is not the first time police have robbed a tourist in the Pacific resort, and their frustration has resulted in a demand for action.

At around 2 p.m. on Wednesday, December 28, a group of municipal officers approached a tourist walking near the Crowne Plaza. They then stole the tourist’s belongings, as well as 300 pesos (about US $21). The incident has outraged both hoteliers and tourists.

Though it might sound a little hollow, the mayor said that he has “no tolerance” for officials who commit abuses against visitors, and urged all municipal security forces to refrain from committing crimes. He then insisted that the events will not be repeated.

City officials claimed that the stolen property and money was returned to the tourist.