How safe are tourists in Mexico?

The common advice for travellers to Mexico is that resorts are safe. We know that that is overwhelmingly true, yet the recent bus-jacking and robbery of 22 cruisers visiting Puerto Vallarta, as well as the violent attack on Sheila Nabb in Mazatlan, have raised some concerns.

There are older stories, too.  In 2006 there was the case of the murder of the Canadian couple Dominic and Nancy Ianiero, who were found with their throats slashed in their room at a five-star resort near Playa del Carmen. And there is also the Beresford-Redman case, in which the reality TV producer has been charged by Mexican authorities with the 2010 murder of his wife at the Moon Palace Resort in Cancun.

In the Ianiero and the Beresford-Redman cases, at different phases in the respective investigations, there has been speculation that the murders might have been pre-meditated with the intention of committing the crimes in Mexico, because investigative and judicial processes are weaker there, and because non-Mexicans would be inclined to assume the crimes were due to a higher degree of lawlessness in Mexico.

(It should be noted that La politica es la politica has had communication with Mr. McKay in the past, and respects his judgment as being fact-based and in no way alarmist.)

La politica es la politica: How good are resort hotels in Mexico at both preventing crime and at assisting authorities in solving crimes?

Walter Mckay: Hotels are good at preventing crime and poor at assisting investigations to solve crimes. To understand why, one needs to understand the two separate paradigms involved: economic security and personal security. Hotels are more concerned with the former while the tourist assumes it is the latter (often the two over lap, i.e., measures that the hotel takes to ensure the economic security of its interests also serve to protect the interests of the tourist vis-a-vis personal security, but this does have gaps, as illustrated by your examples). For instance, all inclusive resorts require colored wristbands for each guest as a means of controlling who has access to the "free" food and drink and other amenities rather than for the safety and security of the guest (even though the control of access to the facilities serves this same purpose). Hotel security are trained in limiting access to the hotel and in meeting the quests needs rather than as investigators or crime scene technicians; thus, if a serious crime does occur, it is the hotel's interests that are of priority rather than the victim's needs.

WM: Security guards are not "valuable" at all and may have little to no formal training for the position. They are more there for protecting hotel interests rather than investigation...at most, to catch a criminal caught in the act and hold him/her for the police. Background checks are not done on the staff (for the most part). And corruption is rampant. 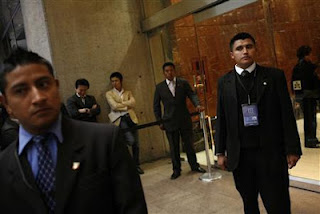 Who are they working for?

LP: Also in the Beresford-Redman case, there is highly detailed information – down to the minute – on swipe-key access to the hotel room. Do most resorts in Mexico have this technology? Do you consider it valuable?

WM:  The card swipe technology is part and parcel of it being an electronic system that is controlled by the front desk (to activate and deactivate cards); thus, tracking would be easy. I would consider it valuable, but in light of the dismal investigative ability of Mexican police it is not used to its potential (98.5% of all crimes in Mexico are unsolved).

LP: At the Moon Palace Resort in Cancun, security guards check all cars that come and go. How important is monitoring automobile access? Are there better/worse ways to do it? Is there automated technology that can do this?

WM: Controlling car access is important as a security feature. Usually five star hotels all have cameras as well, so that the vehicles’ plates and the faces of the people exiting and entering are recorded. However, this is more a deterrent to crimes of opportunity (to dissuade them) rather than a strategy against criminals who want to target the hotel and/or its guests. The professional criminal will steal a car to commit the crime (which happens on a daily basis all over Mexico).

LP: In the Sheila Nabb case, video footage provided some assistance, but there was no camera in the elevator. Is this normal? What role does video surveillance play? There doesn’t seem to be any video surveillance to assist in the Beresford-Redman case.

WM: Cameras in elevators are hit and miss...as a "guesstimate", I would say 30% of five star hotels would have them (the hotel that Nabb stayed in was five star). Video surveillance is an investigative aid, not a deterrent (the UK is an excellent case study on this). And again, you need capable, competent investigators to follow up (which Mexico lacks). Finally, the footage is difficult to use, especially if it is grainy and/or the suspect does not look up at the camera etc.

LP: Beach access seems to be a significant problem. It appears to be how the assailant got access to the hotel in Mazatlan where Sheila Nabb was assaulted. Can you comment on how hotels can best address this?

WM: The man charged with the Nabb case most likely is NOT the one who committed the crime and thus we do not know how access was gained to the hotel or if it was not another guest, employee, or even her husband who did it...it is all speculation. However, the issue of limiting beach access as a measure to improve the security of the guests’ conflicts with the economic incentives of the hotels to ensure that the guests are happy and not bothered by such restrictive security. The wrist band tactic used by all inclusive hotels might work, but then you have to hire extra personnel to monitor the guests (cutting into profits).