Behind the numbers: A/H1N1 in Mexico is cause for concern

The head of Mexico’s Ministry of Health, Solomon Chertorivski, has described as “absolutely normal” the 29 A/H1N1 influenza deaths recorded so far this season.

Since January 1st, there have been 1,623 cases of severe influenza, of which about 90% are thought to be the A/H1N1 or “swine flu” strain. This was the strain that was responsible for the 2009 pandemic in Mexico; however, it is now considered to function more as a seasonal flu.

In total, there have been 32 influenza deaths – the remaining three were not confirmed as A/H1N1. Chertorivski said that, of these 32 deaths, 31 had not been vaccinated, and 70% had other serious maladies such as diabetes, cancer, or hypertension.

In a news conference Chertorivski said that he fully expects the levels to increase in February and March, and then to fall off in the Spring. He emphasized that the profile of this year’s flu season is well under any level that would cause concern for a pandemic. 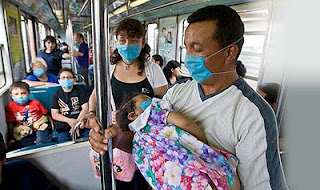 This year, the virus has tracked from the southern hemisphere, and as moved north during Mexico’s winter months. The total numbers are falling within what the Ministry anticipated, with a total of 7,000 to 9,000 – and a possible outside range of 5,000 to 11,000 – cases expected by the end of the season.

“We will receive many fewer severe cases than in 2009,” said Chertorivski. “The conditions are very different, so there is no reason for alarm.”

However, there are aspects of the disease profile that are worrying, and that Chertorivski failed to emphasize: first, the fact that A/1H1N1 has spread widely throughout the country; and second, that it is beginning to kill people who are not in high risk groups.

For example, women are being infected at a slightly higher rate, and two recent deaths in the northern state of Tamaulipas, which borders the United States, are cause for concern. There have only been 12 confirmed cases in Tamaulipas, and to have two deaths is an extremely high mortality rate. As well, the dead are a healthy 33 year-old female nurse, who expired after a week of illness, and a healthy 34 year old man.

The argument that 31 of the 32 dead had not been vaccinated is therefore questionable, as the vaccine is only being recommended for high risk groups: children, the elderly, and those with pre-existing conditions. Healthy young adults are not supposed to get the vaccine because, presumably, they are strong enough to ride out the illness. But that clearly was not the case in Tamaulipas – those two individual were not intended to be vaccinated.

The state of Michoacán recently confirmed 86 cases and three deaths. Hidalgo has 207 reported cases of A/H1N1 and five deaths. At the end of January, Baja California reported its fourth death among 60 cases. In this example, the state health secretary emphasized that the dead had complicating risk factors, such as hypertension and obesity – but these are not as significant as being very old or young, or having a more serious illness.

As well, Colima has reported 55 confirmed cases and an “indeterminate” number of patients who are presenting with symptoms of influenza. Of these cases, 70% were in Manzanillo. Last week, there were only 32 confirmed cases, and Colima authorities stated that the number of contagions was “accelerating”.


Also, if you have read this far, perhaps you would support our efforts? We do this for free. Supporting La politica es la politica is easy - simply click on the "donate" button on the upper right-hand side of the page. We are talking small generosities, not big bucks. As a heads up, Pay Pal will insist that you use it if you are already on account. For direct credit card payment, you will then have to use a number and email that Pay Pal doesn't recognize in order to escape their benevolent grasp.
Posted by TimothyEWilson at 18:14