All of this activity is occurring during the bloodiest period in Mexico in a century - over 47,000 people have died in the country's drug war in the past five years.  As well, The United States has recently extended its travel advisory to certain parts of Mexico. 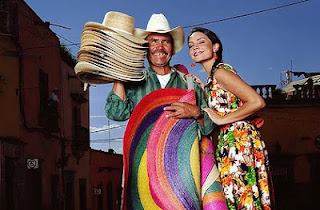 She's not too worried

Using guidelines established by the World Tourism Organization, the Bank of Mexico (Banco de México, or  “Banxico”) and the Sistema Integral de Operación Migratoria (“SIOM”) broke down the numbers into segments: overnight border travelers, which increased 3.4%, to 9,944.390; and non-frontier tourists, which totaled 12,733.000 persons, a modest increase of 0.7%.

According to the Banxico/SIOM numbers, when looking exclusively at international visitors by air, December saw year-over-year growth of 13%, November 6.7%, October 8.2%, September 12.7%, and August 1.2%.