Cynthia (Cyndy) Vanier, the Canadian charged with organized crime, falsifying documents and attempted human smuggling in an alleged plot to spirit Saadi Kadhafi – former dictator Moamer Kadhafi’s third son – from Niger to Mexico, is now incarcerated in one of the worst prison systems in all of Mexico.

Vanier, who was arrested in Mexico on November 10, 2011, has insisted on her innocence, claiming no knowledge of the plot. She argues that she has been set-up, and that the false Mexican electoral identification card found on her person was in a wallet given to her twenty minutes before her arrest.

She has also complained of rough treatment, most notably of being elbowed in the kidneys by a female police officer while en route to a detention centre.

Other complaints include being denied bathroom access and medical attention. According to Ms. Vanier, she has suffered "physical, mental and emotional abuse and trauma, and my rights as a Canadian citizen have been violated based on my international human rights as well as the Mexican constitution."

Now that she and co-accused Gabriela Davila Huerta have been transferred from a detention facility in Mexico City to a woman’s prison in Chetumal, in the state of Quintana Roo on the Yucatan peninsula, Vanier can expect to face a fairly rough go of it. Quintana Roo was ranked in 2010 by Mexico’s Diagnóstico de Supervisión Penitenciaria, a federal organization that provides prison oversight, as one of the worst of Mexico’s 32 states for prison conditions.

Quintana Roo shared the bottom rankings along with Sinaloa and Tabasco, scoring 4.45 out of an ideal of 10. Sinaloa received a score of 3.88, and Tabasco a score of 4.01.  The scores have resulted in jokes among Mexicans that Quintana Roo took the honour of being “first among the last” in prison conditions.

Specific to the facility in Chetumal, the score was slightly better, at 4.95. But it seems that this bump was due more to Chetumal’s moderately better administrative efficiency.

When it came to basic human rights for a “dignified” life in prison – which covers medical, psychological and psychiatric as well as material conditions, including maintenance of kitchens, dining rooms, and lavatories – the state as a whole eked out a 4.40.

Most worrying perhaps for Ms. Vanier is the weak scoring for personal safety and the hygienic conditions in the cells themselves. When it comes to “ensuring physical and moral integrity” Quintana Roo could only muster a 3.82.

And it would be wrong to assume that because Ms. Vanier is in a woman’s prison she is somehow going to have an easier go of it. Last October 24 dangerous federal prisoners – two of them women – were transferred out of Chetumal to a high security island prison in Tepic Nayarit.

These criminals were being held on a variety of crimes, including drug trafficking. They are now being held in one of the last convict islands on the planet – the Maras Islands, off the coast of Puerto Vallarta.

The convicts were considered so dangerous the Mexican authorities transferred them by a Boeing 727 owned by the federal police. The prisoners were moved from the prison to the airport in Chetumal in what is called a “rhino” – essentially a heavily armoured truck – which was escorted by four federal police patrols.

There have been other, more recent, moves of this sort. Quintano Roo’s governor, Roberto Borge Angulo, signed an agreement with the federal government on December 8, 2011, allowing for the transfer of another 28 convicts to the federal maximum security prison on the Maras Islands. These, too, were transported in a rhino and flown out in a Boeing 727.

The governor stated that the agreement to move convicts out of Quintana Roo’s prisons to the Maras Islands was twofold: first, to reduce the number of dangerous prisoners; and second, to reduce chronic over-crowding.

In commenting on the latest transfer, Borge Angulo said that the majority of these prisoners, who came from Colombia, Venezuela, and Mexico, were linked to murder, organized crime, drug trafficking, and crimes committed with the use of weapons only allowed by the Mexican military.

Short of moving all prisoners to an island, however, it is virtually impossible to keep Quintana Roo’s prisons safe.

Last summer two 380 magnum handguns and 56 rounds of ammunition were discovered in a prison in Cancun, resulting in renewed efforts to clear weapons out of all facilities – including at Chetumal.

Only a few days before, the director of the Chetumal prison had been dismissed for allowing a prohibited item into the prison.

The item in question was not a weapon, or drugs. It was a suitcase. The girlfriend of an inmate almost got him out in the case after a conjugal visit, but her plan was foiled by some guards. 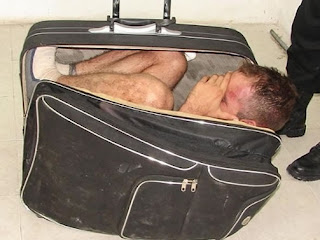 He almost made it

As it stands, the prison conditions at Chetumal have caused Ms. Vanier some distress. She has complained that she has to purchase her own food, yet this is normal practice in Mexican prisons, where inmates are usually only provided the basics: rice and beans.

And, though she may still be found innocent of any wrongdoing, for now Ms. Vanier is unlikely to get much sympathy from the authorities – or fellow inmates.

For a detailed look at the Cynthia (Cyndy) Vanier story, including a detailed timeline, check out

SNC-Lavalin looks in mirror, sees self. 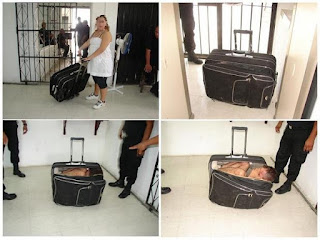