June 12. The United States Embassy in Mexico, via its Consulates, has come out with a truly bizarre travel warning, advising its citizens in Mexico “to maintain a low profile and a heightened sense of awareness.”

On the morning of Tuesday, June 12, the New York Times broke the story that seven people had been arrested in connection with a scheme to launder money by buying race horses that ran at Ruidoso Downs Race Track & Casino, in New Mexico.

As part of the law enforcement operation, authorities have indicted Miguel Ángel Treviño Morales, 38, one of the leaders of the ultra-violent Los Zetas cartel, as well as his brother, Oscar Omar Trevino Morales. Both are believed to be in Mexico.

Miguel Ángel Treviño Morales is notorious for acts of extreme violence and cruelty – even dismembering his victims while they are still alive. As the New York Times reported, “dismembered bodies, dumped by the dozens, have become his calling card”. 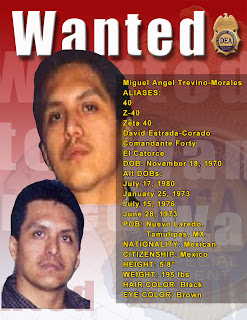 The concern is that Mr. Treviño Morales, given his reputation, could start ordering retaliatory hits against Americans.  The Embassy warning is highly unusual, and disturbingly lacking in details.

In its warning, the U.S. Embassy specifically alerted U.S. citizens “traveling and residing in Mexico to the enhanced potential for violence”.  Normally, such warnings address specific geographic areas and behaviours. This most recent alert suggests there is concern that Los Zetas, given their horrific reputation, could strike out at any American, anywhere in Mexico.

The indictment alleges that about $1 million a month was directed from illegal drug sales for the purchase of quarter horses, with millions of dollars passing through front companies. The financial transactions occurred in Texas, New Mexico, Oklahoma and California.