Acapulco: five dead in one day from 9 mm handguns

June 20. As the drug war wages in Mexico, much attention has been given to the “cuerno de chivo” (goat horn), the street name for the AK-47 (Kalashnikov), the assault rifle favoured by gangsters.

However, local gang activity on the streets is often defined by the 9 mm pistol, as can be shown by recent events in Acapulco, where five people were shot to death on one day by handguns. 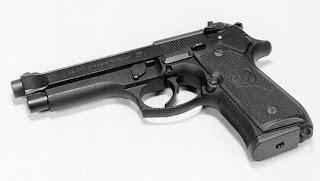 The Beretta M9 - favoured by the U.S. military, and Mexican gangsters

As well, there is evidence that families of the dead are rallying and refusing to comply with police investigations – even denying access to bodies for autopsy.

The first incident on Monday, June 18, took place in broad daylight in a busy thoroughfare, when two siblings, Martha Victoria and Jorge Luis Mondragón Marino, were shot to death.

The homicides occurred at about two in the afternoon at the corner of Taller street and Cuauhtémoc avenue.

According to municipal police, the siblings, aged 36 and 22 respectively, were executed by 9 mm pistols. At least six shell casings were found at the scene.

They were shot where at the Maxitunel exit leads toward Cuauhtémoc. The victims were apparently killed while travelling in a compact car. They were both shot in the head.

Also during the afternoon of Monday, June 18, three youths were shot to death in two separate incidents by groups of armed men.  The first of these incident occurred at 5:40 p.m. in a housing project, where two youths were shot by 9 mm pistols.

The bodies were found approximately four metres form each other, and were of young men of about seventeen years of age. One was casually dressed in black Bermuda shorts, a white T-shirt, and tennis shoes. The other was wearing blue trousers, a red shirt, and sandals.

Both bodies were taken by officials to forensic medical services for autopsy.

In the other incident, a 19 year old identified as Jorge Luis Gomez Hernandez was also shot by 9 mm caliber pistol. This incident occurred slightly earlier, at around 5:20 pm, at the soccer field in the “PRI” neighbourhood.

At least eight shell casings were found at the scene of the crime. In an unusual turn of events, the family refused to turn the body over to the medical examiner for autopsy. In Mexico, victims of violent crime are required to undergo an autopsy for evidentiary purposes.

It appears that authorities are not pressing the issue – possible proof that they have no intention of investigating the death. Conviction rates for murder in Mexico are estimated to be as low as 1.5%.