The past few years have seen the Catholic Church rocked by abuse scandals around the world. The pattern has been consistent: the scandals first break in more open societies, such as the United States and Canada, and then shift to those places only recently out from the shadow of Catholic influence over political spheres, such as in Ireland and Brazil.

The scandals also reveal a disturbingly consistent approach on the part of the Church. When complaints are made, the culprits are simply moved to other parishes, sometimes with duties that still include exposure to children. If victims have reached adulthood and are persistent in their complaints, they might be offered a secret pay-off.

Over and over again, even well-meaning functionaries within the Church see this as an internal matter, and not one for the secular courts. Above all else, the important thing is to maintain the “sanctity” of the Church itself.

Sadly, this story is a long way from over, for the simple reason that there are many historically Catholic countries that have large poverty-stricken populations with little access to economic or political power.  Indigenous communities are at particularly high risk.

Not surprisingly, then, Mexico’s southern state of Oaxaca, with its large Zapotec population, is now in the spotlight. At least 45 indigenous children and youth were allegedly sexually abused by a priest named Gerardo Silvestre Hernandez. This evidence has been collected since 2009 and, as is now pro forma for the Church, was mitigated by evasive action from higher authorities, in this case archbishop José Luis Chávez Botello. 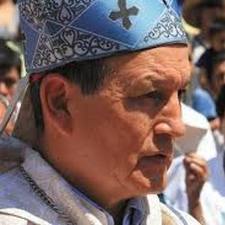 On Sunday, May 27, 2012, Gerardo Silvestre was finally suspended after a complaint was made public from a mechanic whose son had acted as an acolyte in Silvestre’s parish since 2006. The child attempted suicide twice; on the second occasion, it was after Silvestre came looking for him at his home.

Two more public complaints quickly followed from individuals who had spent their childhood in San Pablo Huitzo, where Gerardo Silvestre was the parish priest.

When the first complaint was made public in May, archbishop Chávez Botello responded by saying that the Church could not comment on public complaints, and that without knowing the specifics of the charge it was unfair to accuse the archdiocese of inaction.

He further stated that without “prior notice” they had no means to assess the validity of the accusations.

However, it turns out that archbishop Chávez Botello had been notified of the behaviour of Gerardo Silvestre as early as June 2009. There was even a report provided by no fewer than seven diocesan priests that referred to "a documented case of clerical child abuse in an indigenous area" and "love of alcohol, money and power”.

Yet nothing was done.

In a formal letter sent to cardinal William Joseph Levada, head of Oaxaca’s Congregation for the Doctrine of the Faith, the priests wrote that on June 16, 2009 they had warned their archbishop (Chávez Botello) and his auxiliary bishop, Óscar Campos Contreras, now bishop of Tehuantepec, of the past and ongoing pedophilic behaviour of father Gerardo Silvestre.

Still, nothing was done.

So they then sent essentially the same letter to the Vatican on August 4, 2010. The plea was desperate, speaking of “the great suffering of children and indigenous adolescents, their parents and whole villages."

And still, nothing was done.

Perhaps most shocking about these declarations was their incredible detail. The priests were not making vague accusations. There were specific accounts of the priest plying the children with alcohol, and having one of them openly “sucking his cock”. The priests included video testimony of now-adult men who had been abused by Gerardo Silvestre when children. All-in-all there were more than 40 named individuals who claimed abuse at the hands of father Silvestre in many communities, among them San Ildefonso, Villa Alta, Temaxcalapa, and Santiago Camotlán.

And the kicker? In a meeting in which the faithful rebuked the Church, Gerardo Silvestre told the parishioners that “the bishop is also my chicken”, adding, for those who might not have understood, that the bishop was “my boyfriend, my lover, my partner”.

This information was sent by the priests first to Chávez Botello, and then to Rome.

The priests also warned that the problem could be more widespread. They spoke out “against a former superior of the seminary” who allegedly sexually fondled students, as well as “acts of corruption” by another priest. Complaints also referred to drunken, womanizing bishops.

In response, Chávez Botello chose to punish one of the complainants, a deacon, and to promote the alleged abuser, Gerardo Silvestre Hernández, to that same position. Further, on February 17, 2011, archbishop Chávez Botello informed his congregation that Silvestre had been exonerated by the Vatican because there was no evidence of “any truth or weight” against him.

There are many disturbing aspects to this story, but it is clear that the priests are completely confused as to the nature of the offense. They see their responsibility as being to the Church – this is why they lodged their complaints internally. But these are criminal complaints, and should have been taken directly to the police.

As it stands, it is up to the victims and their families to speak out. That is an added, and grossly unfair, burden, but it is also a future source of strength. Once it is clear that the shame is not on the victims, but on the perpetrators and their protectors, then perhaps society can respond more openly to address these problems.


Pope Benedict XVI’s recent visit to Mexico was notable for the openness of the complaints from victims of sexual abuse. It was also notable for the refusal of the pontiff to meet with the alleged victims of abuse by Marcial Maciel. Mr. Maciel, now deceased, was founder of the Legion of Christ religious order. The victims claim to have evidence that proves Vatican officials ignored crimes committed by the leader of the influential order.

Pope Benedict XVI has come some way to rectify this situation, being the only pontiff to openly address the issue. But this is not his call. If his organization harbours criminals, then it is culpable, too, and open to prosecution.