Shoot out at parking lot in Bucerias leaves one dead


June 11. One man died and another was wounded in a shooting  in the parking lot of the Mega supermarket in Bucerías, Nayarit, an area popular with  tourists north of Puerto Vallarta, Jalisco.

(For an update on the June 12 warning from the U.S. Embassy, see U.S. Embassy issues sweeping Mexico travel warning.) 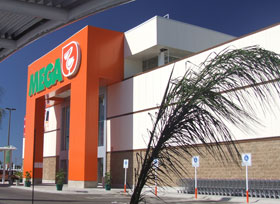 The Mega supermarket in Bucerias

Shots were first heard around 10:30 a.m.  They continued for several minutes and caused panic among shoppers and neighbours.

The firing from assault rifles was rapid and ongoing. Shots were directed at the occupants of a white Lincoln with California plates. A total of five cars were hit with gunfire, as was a Banamaex bank branch.

The dead man was found on the ground. He had been carrying an AK-47, a pistol, and two grenades.

It is unknown at present if the injured person was related to the dead man, or if he was a customer at the supermarket.

Witnesses confirmed that one of the attackers who fled was also wounded.


During the shooting Mega employees grabbed customers and directed them to safety. Store security drew their rifles and customers were led to the back of the store as shots rang out.

From there they were taken into a warehouse, where they remained until the shooting stopped. They were then led out a back door.

They were then told to keep very quiet. The witness “was terrified at first and stood shaking along others who were trying to calm themselves down,” but noted that the Mega staff remained calm.

They “handled it all like it was just a drill, all instructions were in Spanish and English, and because they were so calm I felt safe there, as at that time I don’t think anyone knew what was going on and the window at the main Mega Entrance was shot out.”