Justice Lisa Cameron has sentenced Dean Del Mastro, the former Conservative MP for Peterborough, to thirty days in jail for overspending about $20,000 on his 2008 election campaign.

(Scroll down for video footage by Pamela VanMeer).

Del Mastro, 44, had already been found guilty on three counts of election fraud related to overspending, both on his personal and his campaign limit. The jail sentence is for the first two counts – each of 30 days, to be served concurrently, (i.e. both at the same time, as opposed to consecutively, which would have been 60 days).

After Del Mastro is released, he is to serve four months of house arrest, and will be on probation for an additional 18 months. He also has to pay back $10,000 that Cameron has determined he owed to his riding association.

Cameron delivered an even-handed yet withering assessment of Del Mastro’s crimes.
Read more »
Posted by TimothyEWilson at 12:30 No comments: 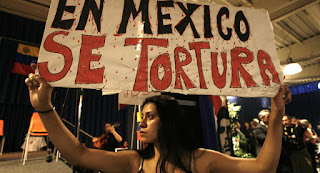 The olive branch is a good idea. The visa, as presently structured, is punitive in the extreme, with many Mexicans unable to fulfil the onerous bureaucratic requirements.  This would go a long way toward improving strained relations between the two countries. A complete cancellation, however, would likely result in a flood of asylum claimants – something Trudeau did not address in his speech.
Read more »
Posted by TimothyEWilson at 16:45 No comments:

Ten days after allegedly murdering her mother and young sister, 19-year-old Anastasia Lechtchenko has been detained by authorities in Tijuana, Mexico.

It is believed that Ms. Lechtchenko murdered and dismembered her mother Yuliya Masney Safonchik, aged 45, as well as Valeria Lechtchenko, 12.

After the bodies were discovered, Anastasia Lechtchenko allegedly confessed to her crimes, telling the police that she thought her mother and sister were “witches”.
Read more »
Posted by TimothyEWilson at 22:06 No comments:

Russian teenager who confessed to murdering and dismembering her mother and sister, claiming they were “witches”, released in Tijuana, Mexico

According to Mexican authorities, 19-year-old Anastasia Lechtchenko Masney has confessed to murdering and dismembering her mother, Yuliya Masney Safonchik, aged 45, as well as her little sister, Valeria Lechtchenko, 12.

Why Ms. Lechtchenko (who in Mexico is also known as Lechtchenko Gubarev) has since been released, and why the court has not issued an arrest warrant for her, is uncertain.

On Wednesday, June 10, Mexican authorities found the two dismembered bodies wrapped in plastic bags in a rented apartment on Paseo Ensenada in the Playas de Tijuana neighborhood, where the family had lived for five years. Police were called after neighbors complained of a foul smell. The two had last been seen on Sunday, June 7.

Two days later, on Friday the 12th, police detained Ms. Lechtchenko. She confessed to the murders during the preliminary investigation, saying that her mother and sister were “dangerous witches”. Aside from the confession, police were led to believe that Ms. Lechtchenko was implicated, as she did not report her mother or sister missing, as well as the fact that the apartment showed no damage or sign of forced entry. Her father was interviewed, as were crime-scene experts.
Read more »
Posted by TimothyEWilson at 16:39 No comments:

Margarita Zavala, wife of former Mexican president Felipe Calderón (2006-2012), has announced that she will be a candidate for the presidency of Mexico in 2018.

Ms. Zavala made the announcement via social media, claiming that her goal was to bridge the enormous divide between Mexico’s political classes and the people.

The former first lady is vying to be the right-of-center National Action Party (PAN) candidate.  She has been a PAN deputy in the Mexican Congress (2006), as well as a two-time local deputy in Mexico City (1994-1997 / 2003-2006). She is the only wife of a Mexican president to have served in Congress.
Read more »
Posted by TimothyEWilson at 19:28 No comments:

Oliver Caraco, formerly of Miami, Florida, was killed outside of the “La Lomita” nightclub on Saturday night, allegedly by three youths.

According to reports from Mexico, Mr. Caraco, 53, was a regular at La Lomita. A group of up to fifteen young people started to harass Mr. Caraco in the bar. As he left, they threatened to steal his scooter. He fended them off, and got as far as a nearby bypass (“Libramiento Dolores”), where the three caught up to him and beat him to death.

Some reports have Mr. Caraco coming upon the group first outside the bar, and then confronting them as they tried to steal his motorbike. A scuffle ensued, and he got as far as the bypass, where the three men killed him.
Read more »
Posted by TimothyEWilson at 16:16 1 comment:

However, the Pemex document contradicts another from Mexico’s Ministry of Energy (SENER), dated April 2010, which specifically references the hydraulic fracturing of 1,323 wells, and with this greater number only being in the “Chicontepec Paleocanal”, a well-known oil field that covers the states of Veracruz and northern Puebla.
Read more »
Posted by TimothyEWilson at 20:49 No comments:

For Justin Trudeau and the Liberal Party of Canada, it was supposed to be easy. Set yourself up as the only alternative to the hated Stephen Harper. Line up the gunwales and fire your cannons at the skull and crossbones. Find that breezy middle, and promise things like “fairness” and “transparency”. Tack to the polls on security. The evil pirate ship will assuredly fire back, but their grapeshot will not even tatter the yardarm of your noble vessel. Gallant ensign Trudeau will pull a head and sail across the finish line, firing his guns in triumph.

The strategy was, it seems, set in stone. But, given changing currents and winds, that’s no certain way to win a naval battle. In fact, it might just sink you. As the NDP moved up in the polls and jockeyed with the other two parties, the Conservatives and the Liberals were still pouring their money into advertisements, attacking each other. They jumped each other’s decks, swords drawn, and the NDP, more or less ignored, sailed right past the fracas.
Read more »
Posted by TimothyEWilson at 16:20 3 comments:

The recent EKOS poll is bad news for Justin Trudeau and the Liberal Party of Canada. Among the three major federal parties, EKOS has the NDP at 31.3%, followed by the Conservatives at 29.2% and the Liberals bringing up the rear with 23.9%.

Significantly, the poll shows that the Conservatives and Liberals are struggling with both “ceiling” and leadership numbers.
Read more »
Posted by TimothyEWilson at 12:56 1 comment: