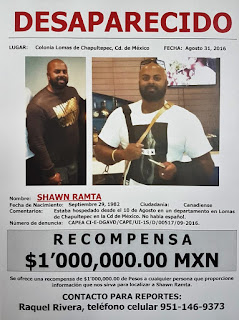 “The Canadian Embassy has contacted all the jails and hospitals, and found nothing,” says Ms. Bassuta. “Beyond that, the Canadian government says the only people who can help are the Mexican authorities.”
Read more »
Posted by TimothyEWilson at 08:52 No comments: