Napoleon Gómez Urrutia heading back to Mexico from exile in Canada

The leader of Mexico’s National Union of Miners and Metal Workers, Napoleon Gomez Urrutia, is heading back to Mexico after a six-year self-imposed exile in Canada.

However, Mexico’s Supreme Court has now ruled that there are no legal grounds for refusing to acknowledge Mr. Gomez as leader of the country’s powerful miner’s union. 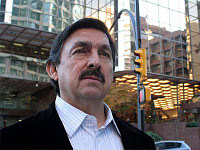 In a 3-1 vote, the Supreme Court ruled against Mexico’s Labour Ministry, saying that only the union can decide whether a member is eligible to lead.

The main thrust of the accusations against Mr. Gómez was that he had illegally wound-up a miner’s trust, keeping funds for himself that were intended to be disbursed to miners after a mine was sold.

Union lawyers have indicated that all funds have been properly accounted for, including those frozen by the Mexican government.

Gómez has lived in exile in Vancouver, Canada, since 2006. He has received the support of the AFL-CIO, which has argued that the Mexican government was on a witch hunt, not only going after Gómez but also attacking the “Los Mineros” union itself, freezing its bank accounts and declaring all strikes to be illegal.

The union boss had accused the former PAN administration of Vicente Fox with “industrial homicide” after a mine explosion that killed 65 miners on February 19, 2006.

All in all, Gómez has beaten back eleven criminal charges against him.

Stephen Harper, the Canadian Prime Minister, spoke recently in Cartegena, Colombia, on the importance of mining to Canadian business in Latin America. For such a pro-business government to offer refuge to the leader of a Mexican mining union was a strong indication that Canada had serious concerns regarding political interference in Mexico.

Los Mineros is best known for its strike against Grupo Mexico, which operates copper mines and railways.

Things got ugly in 2010 when federal troops were sent in to break a strike at Grupo Mexico’s Cananea copper mine, the nation's biggest, which has a long and bloody history of labour unrest.

The mine, which is near the U.S. border, had been shut down for months, but after police removed the striking workers Grupo Mexico signed a contract with a different union. Since then, the company has been gearing up in hopes of doubling output.

The union has kept two smaller mines closed. Officials for Grupo Mexico had no comment on the Supreme Court ruling, but they likely won’t be pleased.

Mr. Gómez Urrutia’s lawyer, Carlos de Buen, said on the Wednesday, May 2nd, that his client could now be formally reinstated as the union's general secretary.

The Labour Ministry, which now clearly has no right to interfere with a union’s decision, told Dow Jones News that it would "adjust its ruling based on those criteria."

We can expect some turmoil upon Mr. Gómez’s return. A dissident group issued a statement on  Thursday, May 3rd, asserting that Gomez's election was illegitimate, and claiming that it would file a complaint against the Supreme Court with the Organization of American States.