May 25. Six people were shot and killed in the Acapulco metropolitan area over a brief period yesterday, including a minor and one woman. Four people were also injured – one of whom was a federal police officer.

Armed men also torched some cars in a junk yard. No casualties were reported in that incident.

According to officials at the state and municipal levels, as well as the Federal Secretariat of Public Security, the first shooting in Acapulco occurred around 4:07 pm in the Emiliano Zapata neighbourhood.

Only minutes later, in the same neighbourhood but this time near the community’s Social Security office, there was more gunfire, with additional shots then reported shortly after in the La Sabana neighbourhood – a more rural area about 21 kilometres away on highway 200.

The first incident occurred when federal police encountered two men in a taxi armed with AK-47s on the main street (Calle 14) of the Emiliano Zapata neighbourhood. They were travelling in a red Volkswagen sedan and, after ignoring an order to stop, opened fire on the police, who immediately repelled the attack.

The taxi was then abandoned further ahead, in the middle of the road, with one man wounded.

Shortly thereafter another car, a white Chevy, drove right through a police roadblock. The police were obviously on edge due to the previous incident, but the result appears to have been a tragic mistake.

This was oversight with horrendous consequences, the likes of which one might expect in Iraq or Afghanistan.

This car was driven by a local official, Cutberto Bailón Ojendiz, aged 42, and had as passengers his wife and two young children.

The response on the part of police?

A hail of bullets from state and federal forces killed the woman, Silvana Garcia Serrano, as well one of her young children. The father, Bailón Ojendiz, and their other child, Ezequiel Serrano, a boy who is also reportedly a minor under 16 years of age, were injured.

The motor vehicle, which was a convertible, had at least 50 bullet holes in it. It was as if they were taking out Bonnie and Clyde.

Only a few meters away from here, at the corner of Vicente Guerrero and José Gervasio 2, also in the Emiliano Zapata neighbourhood, next to the Mexican Social Security Institute (Instituto Mexicano del Seguro Social, or “IMSS”), the body of Gerardo Bello Morales, aged 24, was found lying in a pool of blood between the curb and a taxi. 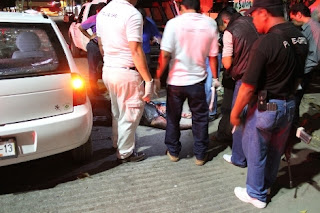 The resort town of Acapulco is experiencing a crime wave

In another case, again in La Sabana neighbourhood, on Lázaro Cárdenas Boulevard, the bodies of two taxi drivers were found in the back seat of a yellow cab. One man has been identified as Manuel Lugo Herrera, the other is so far unknown. Both had multiple gunshot wounds.

At the scene of this crime, which was at the foot of a statue of  revered Mexican president Lázaro Cárdenas, were found empty rounds from AK-47s, nine millimetre pistols, 38 mm “supers”, and the 5.7 mm “cop killer”.

And around dawn on Thursday, May 24th, 21 kilometers down the Acapulco-Mexico highway, another body was found with a message on it – though what it says has not been revealed.

All six dead have been taken to “Semefo”, Mexico’s forensic medical services, for examination.

Also in the early morning hours before dawn on the 24th, a group of men poured gasoline over dozens of cars in a junk yard. The yard is owned by a lawyer with the last name “Memije”, and is located near where the coastal road merges with the highway to Mexico City (Autopista del Sol).

La politica reported on May 16 that three men had been shot and killed in Acapulco – tossed from a taxi. One of the dead was the driver, though it may have been his two passengers that the killers were after.