Within an eight hour period five bodies of people believed to have to have been executed have been found in the Guadalajara area.

The municipalities where the bodies were found include San Pedro Tlaquepaque, El Salto and Tlajomulco de Zúñiga.

On the morning of Wednesday, May 16, a man was found shot dead in Tlajomulco de Zúñiga. The body was found in the El Zapote community, in the Las Animas area behind the Guadalajara airport.

The "escudo", or coat-of-arms, for Tlajomulco

The man appears to have been approximately 25 years old. He was wearing a white tank top, blue denim pants, and white sneakers. He was wrapped in packing tape.

A 9 mm cap was found next to the body, as well as two notes saying he had been killed for being a “rat”.

As well, at 8 a.m. in Tlaquepaque, a neighbourhood to the south of the city popular with tourists, police found the bodies of two men. They have not been identified, and as of yet their cause of death is unknown. 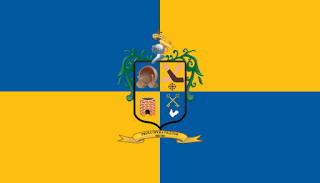 The bodies were discovered on Independence Street, near El Canelo restaurant. Municipal police are now awaiting officials from Jalisco’s Institute of Forensic Sciences.

Two men were also found shot dead inside a Ford Gran Marquis in La Cuesta, near the pedestrian crossing by the park in La Loma, in the municipality of El Salto.

The bodies were of two men in their twenties. They were taken to the morgue for identification.