May 28. The lifeless body of a Bucerias bank manager was found on Sunday, May 27, in the Aurora neighbourhood on the road to Pitillal near Puerto Vallarta, Mexico.

(In related news, on May 28 a man was gunned down by an AK-47 in broad daylight in Cruz de Huanacaxtle near Bucerias. Message board moderators are not posting this, perhaps for fear of raising alarm, but we feel people have a right to know. Please pass on and post - we believe people in La Cruz would like to be informed. ) 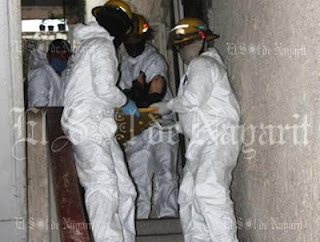 At about 6:20 pm Mexican police began receiving reports that a lifeless male subject, José Santana Caro Ortega, 47, was found in apartment #23 in building 2004-A in the Aurora area.

Police arrived and interviewed a resident of the building, “Martha”, who said that she hadn’t seen José Santana Caro Ortega in days, and that she had noticed a strong odour coming from his residence. 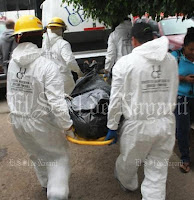 Caro Ortega was a manager at a Bancomer branch in Bucerias.

When officials arrived the apartment was already opened. Apparently, Mr. Caro Ortega’s family had hired a locksmith to open the building, whereupon his body was discovered.

Police have also advised that the victim’s vehicle, a red 2006 Dodge Caliber, has gone missing.

Bucerias is a popular tourist destination near Puerto Vallarta. The area has a large expat community.

(Following inaccurate reports from the Spanish language press, this blog initially reported that the bank manager's body was found in Bucerias. We corrected the article within an hour of posting. Consequently, message board moderators have concluded that the information from La politica is both untrustworthy and irrelevant to residents of Bucerias. The problem is the extremely polarized response: many people believe that crime reports have no place on boards, whereas others think this information is at least, if not more, relevant than updates on found pets, second-hand BBQs, and the local Scrabble club. We are in the latter camp.)