They shoot students, don’t they?

It is no Tlatelolco massacre, but the death of two students from the Normal School  Raúl Isidro Burgos is a clear sign that Mexico’s violent response to the drug cartels has spilled over into what might otherwise be peaceful civilian demonstrations.


The school is to the east of Chilpancingo, the state capital of Guerrero. The killings occurred on December 12th near Chilpancingo on the Autopista del Sol, the main road between Mexico City and Acapulco,

Now we have two dead students in the State of Guerrero and, predictably, some differing accounts of what actually happened. Mexican authorities are promising a thorough investigation, claiming that the people responsible for the deaths will be punished.  This in itself is an improvement on the events of over 40 years ago, when the Mexican government denied that the Tlatelolco massacre had even occurred.

Easy access to media is making it hard to look the other way (listen to some audio from the scene at the bottom of this post). However, the blame game is already underway, with Guerrero State Attorney General Alberto López Rosas having told a news conference that police have discovered an assault rifle and grenades hidden by a young man who was not a student. 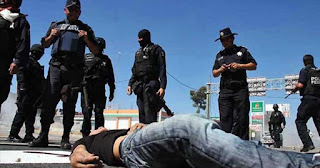 Given that this young man has been arrested on weapons charges, we will certainly have his name released, and a fuller understanding of his presence at the demonstration. Anything less should be cause for suspicion.

In total, the police made 18 arrests. The president of the State Commission of Human Rights (ECHR), Juan Alarcón Hernández, said that many of the arrested were under 13 and 14 years of age. If true, that is a very strange statistic indeed, as the Raúl Isidro Burgos is a teacher’s college, with most students in their early 20s.

Early reports were that the strong response on the part of the authorities came after a student set fire to a gas station, with the police initially shooting into the air to disperse the protesters. The fire at the gas station is certainly real enough, judging by photos taken at the scene.

The students and their teachers have promised to keep up the pressure on the authorities until they get clear answers as to what actually happened.  Their continued mobilization may pose a challenge to the government, but should also make it harder to dodge responsibility.

It should be noted that Raúl Isidro Burgos has a history of activism and conflict with the state government. On November 7, 2007 there was a violent confrontation outside of the State Congress of Guerrero in the capital of Chilpancingo, in which authorities physically removed demonstrating students and graduates.

At present the Attorney General López Rosas say the ballistics tests are being done on the bullets that killed the two students. One officer is being held and has been placed under investigation.

The weapons discovery on the “non-student” has resulted in López Rosas alluding to the possible involvement of “outside elements” in an effort to tie the violent behaviour to organized crime. But why would a criminal join a student protest and set a gas station on fire? The police might argue that the vandalism was intended to force an over-reaction, thus soiling their reputation, such as it is.

However, as anyone who has been at a demonstration knows, usually agitprop works the other way around. In most instances, it is the authorities who place an over-eager demonstrator into the mix, thus offering rationale for a strong police response while also making the demonstrators appear dangerous. If that were the case, however, then the government would assuredly be blaming the violent students, and that is not happening at present.

If true, the government theory adds a new ripple to the ongoing conflict between the Mexican government and violent drug cartels. If the cartels send common criminals into popular demonstrations – essentially hijacking dissent – in order to increase conflict and give the authorities a black eye, the risk associated with legitimate dissent goes up considerably.