Friends, family, and authorities are looking for Carmen Ximena Osequeda Magaña, 39, who disappeared from Huatulco, a resort in the state of Oaxaca on Mexico’s Pacific coast.

She left her house last Wednesday in the company of Alejandro Santamaría (see image of both, below), who is originally from San Luis Potosí. The two were travelling in a compact Chevrolet. Since that date, neither she nor Santamaría have been seen. 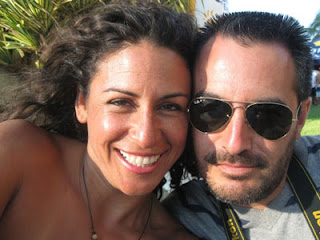 Her mother, María del Carmen Magaña y Pérez, who reported her daughter missing to the authorities, fears that she could be in danger, given that there has been no contact since the day of her disappearance.

As well, the family grew suspicious after thieves entered the home of her mother, apparently with a key, and took televisions, a scanner, and a stereo. After the theft, relatives tried to communicate with Osequeda Ximena, but to no avail. The car has since been found, abandoned, in the city of Oaxaca.

For these reasons, and also because it is unusual behavior for Osegueda Magaña to be out of contact for so long, the family raised the alarm.

Osequeda Ximena was doing research for her doctorate on the Cross of Santa Cruz Huatulco.


UPDATE: Tragically, Ximena and Alejandro's remains have been found. For the most recent update go here.