With Chávez death, Venezuela to call election within 30 days 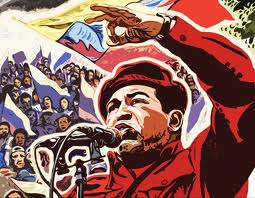 As news broke that Venezuela's President Hugo Chávez, 58, died at 4:25 pm local time on Tuesday, March 5, questions swirled as to the political repercussions.

Had the Venezuelan people been lied to in recent weeks, with the president effectively “brain dead”? Speculation was rife that the president had been on life support since the end of December, with pressure heating up within Venezuela itself. Young activists were even conducting sit-ins demanding to see the president.

Chávez was diagnosed with cancer in June 2011, and had undergone four operations. It is believed he died from a lung infection, a complication of one of his surgeries.

Chávez, born in 1954, had a dramatic political career. The son of school teachers, he was a soldier who first attempted a coup in 1992 against then president Carlos Andrés Pérez. After that failed, he was imprisoned and released in 1994. He was then democratically elected as president in 1999 on a populist anti-American platform.

But his troubles weren’t over. In April 2002 civil unrest resulted in a coup attempt, with Chávez taken by army escort to the island military base at La Orchila.  A wealthy businessman named Pedro Carmona then declared himself president, and proceeded to abolish the constitution and to run the country with a small “governing committee”. The United States hastily recognized the new government, but protests followed and Chávez was returned to power by loyal military units.

Under Chávez Venezuela exported almost all of its oil resources to the United States. Nonetheless, he was always fiercely critical of his northern neighbour and benefactor, referring to former president George W. Bush as the “devil” during a United Nations address, and later expressing his disappointment in President Barrack Obama.

His legacy will be mixed. Though he did inspire successful left-leaning movements in Latin America, particularly in Ecuador and Bolivia, Venezuela recently underwent a currency devaluation, and the capital city Caracas remains one of the most dangerous cities in the world. Chávez also cozied up to Iran and Syria.

Venezuela will now face an election within 30 days, with Vice-President Nicolas Maduro expected to win, though perhaps not by a wide margin. The opposition in Venezuela is more united than ever, with the Democratic Unity Roundtable still intact.

It should be noted that though Maduro, a former bus driver, may not be as beloved as Chávez, he is certainly an ideologue. Just before the announcement of Chávez’s death, Maduro, during a rambling hour-long press conference from the Miraflores presidential palace, suggested that Chávez’ illness might be the result of a foreign conspiracy.

He also announced the expulsion of two U.S. Embassy's military attachés, accusing them of "proposing destabilizing plans" to members of Venezuelan armed forces and of "illegal activity that mocks international conventions."

Speaking in on national television, Maduro said that that one of the attachés "has had meetings in recent weeks with active military members that go against the military stability of Venezuela."

February 27: Former Panamanian ambassador to the OAS says Hugo Chavez has been “brain dead since December"