In Mexico, a dramatic decline in seizures of cocaine and heroin

La Jornada: At the same time that Mexico has become the potential producer of 9 percent of all heroin trafficked in the world and become renowned for the ease of setting up methamphetamine laboratories, it has experienced the largest drop of cocaine seizures of all countries in a study by the International Narcotics Control Board (INCB). The annual report also revealed that heroin seizures had fallen off by 30 percent.

The report was distributed by the Secretary of Foreign Relations. It claimed that despite the deployment of a high number of military and police forces over the past 5 years, 90 percent of the cocaine that arrives in the United States passes through Mexico.

The study states that the three main producers of heroin used in the United States in 2009 are Afghanistan, Colombia, and Mexico. According to the Department of Drug Enforcement in Colombia, 58 percent of the heroin seized in the United States came from Colombia while 39 percent originated in Mexico. The seizures of this drug have diminished from around 459 kilograms in 2005 to 369 kilograms in 2010.

The regional analysis section mentions that in 2010 Canada, the United States, and Mexico continue to show elevated levels of production, trafficking, and consumption of illicit drugs.

The human, social and economic cost of the improper use of drugs in North America has been heightened. In 2007 the estimated economic impact of the use of illicit drugs in the United States was $193 billion. For their part, the Canadian Center for Substance Abuse has calculated that the costs for the Canadian economy due to illicit drug use surpasses $9 billion per year. “In Mexico, the government has budgeted $10.7 billion for the army in 2012,” remarks the report.

Central America and the Caribbean, “for their strategic geographical location,” continue to be important areas in trafficking drugs from South to North America. “A few Mexican drug cartels have moved their operations to Central America, which has consequently bore witness to an increase in violence, kidnappings, bribery, torture, and homicides.”

The study also reports that “Guatemala has been utilized as a transit route for cocaine headed to Mexico, and despite the efforts by Costa Rica, Honduras and Nicaragua in 2010 to combat drug trafficking, for the first time, these countries have became important areas of transit for drugs destined, principally, for the United States. At the same time, the Caribbean has become less important as an area for drug shipment north.”

BBC News: He crossed the river Rio Grande - or Rio Bravo as it's known in Mexico - along the Texas border to work illegally as a construction worker in Nevada.

But when the US economy began to stall with the housing market collapse six years ago, he decided to leave that dream behind. Last January he became the mayor of Chilcuautla, where 80% of the population has a family member in the US.

Vancouver Sun: Mexico’s tourism chief has met with Texas officials to head off a potential warning against visiting Mexico during the lucrative Spring Break and summer vacation seasons.

The meeting on followed a robbery of a tourist bus in the resort city of Puerto Vallarta.

The Cali cartel, Mexican smugglers and the war on drugs

The Los Angeles Times, Opinion: If the often-frustrating 40-year war on drugs has taught us anything, it is that even success can have dangerous downsides. Here's an example I came across in researching a book on the downfall of the Cali cartel.

It all started in the summer of 1989, in the northeast San Fernando Valley. But first some background:

Throughout the 1980s, Mexican smugglers were traditionally paid as couriers for hire by the Colombian cartels. They transported cocaine across the U.S. border for commissions that started as low as 20% of a load's wholesale value. As the flow of drugs increased, so did pressure to raise that commission to 30%, then 35%, 40% and more, until the Colombians said: "No mas." No more."

La Jornada: "Government sources have reported that four lifeless bodies have been found inside a SUV in the Veracruz neighborhood of Ampliación las Bajadas.

According to primary reports, at about 12:00PM on Tuesday, the Naval Police received word that a white Ford Explorer had been abandoned on the corner of Calle Siete and Zapata in Veracruz.

Members of the federal police force arrived at the scene, cordoning off the area, while local authorities performed the standard crime scene procedures.

Forensics officers transported the bodies to the coroner for autopsies that will attempt to determine the cause of death and the identification of the victims."

Los Angeles Times: "For Mexican tourism officials, the perception that their country is unsafe just doesn’t add up.

Twenty-two passengers on Carnival's Splendor, on their way back from the pueblo of El Nogalito, in Mexico, were stopped as their bus was returning to the ship. Gunmen took electronics, jewelry and money, the Los Angeles Times reported Sunday. No one was injured.

In a statement, Rodolfo Lopez-Negrete, chief operating officer of the Mexico Tourism Board, called the robbery "a rare and isolated incident," adding, "While 22 people were in involved in this incident, in all of 2011, 22 million (22.7 million to be precise) international tourists visited Mexico, in addition to the many millions who arrived by cruise line. The vast majority of these visitors enjoyed their stay in Mexico without any incident.”

Fronteras Desk: "In the violent city of Ciudad Juárez, one industry is making a strong and sudden comeback: nightlife.

Thanks to police protection in certain parts of this Mexican border city, business owners have decided to reopen. That means recently abandoned hot spots for clubs and bars have come alive again." 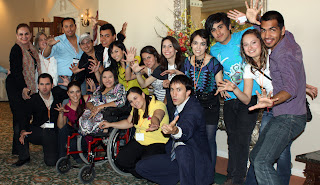 Remember, people don't just die in Juarez and Tijuana - they live there, too

In revived Tijuana, a new calm delights - and mystifies

Kansas City Star: " This border city, once as violent as any in Mexico's drug-fueled trafficking wars, appears to have shaken off narco-related mayhem, allowing an explosion of new music halls, art galleries and world-class restaurants.

Tijuana's 1.6 million residents are grateful for the calm, which allows them once again to dine out at night, visit nightclubs and generally exist without fear of the sudden, random violence that had become so much a part of Mexican life.

But behind the relative peace is a nagging question: Why did it occur? Residents admit that they don't know.

"It's not very clear what happened," said Luis Ituarte, an artist and promoter. "It's just not as bad as it used to be."

But some experts cite a more sinister reason. They say the calm is because Mexico's most powerful crime group has seized control of Tijuana's key drug-trafficking corridor and now enforces the peace. Rival drug gangs that used to gun down one another simply are working together now."

InSight Crime: "The recent arrest of an El Paso, Texas official on drug trafficking and money laundering charges has fueled concerns over corruption along the border with Mexico.

Last week, DEA agents arrested El Paso County Commissioner Guillermo “Willie” Gandara Jr. on suspicion of being part of a mid-size drug trafficking network. Gandara, who is running for a seat in the Texas House of Representatives, stands accused of distributing more than 110 pounds of marijuana since November 2010, and laundering the profits."

The dark side to Juarez's security gains

InSight Crime: "Mexican border city Juarez, formerly the most dangerous place in the world, made significant security advances in 2011. But this may have come at a steep cost in terms of human rights, as Mexico’s Proceso argues.

Though Juarez remains the most violent city in the country, murders have dropped precipitously over the past year or so. In May of 2011, the city saw the lowest number of monthly murders in two years, with the total number of killings dropping·by somewhere between 40 percent and 50 percent from the same period in 2010."

InSight Crime:"Colombia's police have announced the arrest of 34 suspected members of the Galeano Clan, a drug trafficking group which allegedly had links with the Mexican Sinaloa Cartel and with Guatemalan criminal organizations.

Those arrested are suspected members of a group called the Galeano Clan, which the authorities say has ties to Mexico's Sinaloa Cartel and to Guatemalan trafficking groups the Lorenzanas and the Mendozas."

KSAT- San Antonio: "Police said a major drug seizure in Mexico will have an impact locally on the streets of San Antonio.

A total of 15 tons of crystal methamphetamine was seized by the Mexican military a few weeks ago near Guadalajara, and DEA officials said there is a good chance some of it could have ended up in Texas. DEA agent Mauricio Fernandez said about 80 percent of the meth in San Antonio comes from Mexico. He said it's readily available and extremely pure."

Lt. Darrell Sanders with the Bexar County Sheriff's Office said major meth crackdowns state-side has pushed operations south of the border, so a major bust there has a direct impact here."