Ex-pats living on the Pacific coast of Mexico north of Puerto Vallarta, as well as in the Lake Chapala area, have been subject to a rash of amateurish extortion attempts. There has also been a rise in “virtual kidnapping” efforts – resulting in a warning from the U.S. Consulate in Guadalajara – and more violent incidents against Mexicans around Lake Chapala.

English-speaking residents in Bucerias and in the Lake Chapala area have been receiving calls to their Telmex landlines in which callers claim to be from the hyper-violent Zetas cartel. The callers claim they want money for "protection".

The callers usually state they "have guns and know where you live". They might also claim to have had previous communication with a householder, and say that they will return the next day for payment. The calls are usually in Spanish, but are sometimes in English. Often, they originate from prisons.

Mexican police have been advising foreigners to “just hang up” and “not to worry about it”. Though this sounds weak, it is reasonable advice: this scam has been active for some time, and only works if the person stays on the line and participates. One other option is to pay Telmex for an unlisted number.

The recent security message for U.S. citizens that was sent out by the Consulate in Guadalajara was specific to “virtual kidnapping” attempts. In these cases, family members in the U.S. are called and told that loved ones in Mexico have been kidnapped.

According to U.S. authorities, the scam usually starts with the collection of information about the family. Specifically, the Consulate states that:

Someone may call the home and pretend to be a salesman, friend, businessman, pastor, etc.  The caller will use the information collected during this call to convince the family that someone has actually been kidnapped when he calls back days or weeks later.  In addition to telephone calls, email and social media sites are used by the criminals to collect information on the victims.

When the virtual kidnapping call is made, it often begins with a crying/ pleading voice immediately after the call is answered and before the “kidnapper” gets on the phone.  In this manner, they hope to confuse the family and get them to give additional important information.  The voice of the “victim” will usually be crying and/or hysterical – this makes it difficult to identify and increases the likelihood that you will believe it is in fact your loved one.

Criminals will try to use fear, tact and timing against you.  For example, they plan their calls to coincide with times when it will be difficult to contact the child or another adult immediately (e.g. when child is either on their way to or from school).  All calls demand money for the release of the loved one and stipulate no police involvement.  Often times the callers will give statements to suggest surveillance such as: “we saw you at the school with your camioneta”.  Very vague but implying they have been watching your family and using fear and everyday routines against you to reinforce the threat of the kidnapping.  They will also impart a sense of great urgency.   For example, their initial demand maybe for some outrageous amount of money, but then they will “negotiate” and ask how much you have access to right now.

Meanwhile, businesses in Lake Chapala are being negatively affected by extortion rackets. Word on the street is that last year criminals tried to extort money from a respected veterinarian who refused to pay and closed down.  A hairdresser west of Chapala also moved his business into Ajijic to avoid paying extortion.

About four months ago on Jocotepec, also on Lake Chapala, a merchant refused to pay and, so the story goes, either one or two of his sons were murdered shortly thereafter. Only a few months ago a Mexican doctor was kidnapped – she paid, and was apparently returned unharmed. 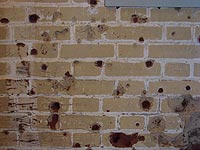 Refusing to pay can have consequences

In the past few weeks there is word of attempts to extort money from the hotels in Chapala. Sources close to La politica say that a manager refused to pay, and 30 or more bullets were fired into his house.

The police are releasing no crime information, which is only making things worse. The accounts mentioned above, for example, are hard to verify. And to hear that "one or two" people might have been murdered offers little reassurance to residents, whether Mexican or foreign.