Shootings in Coahuila shut down border bridges with Piedras Negras

A series of confrontations between unknown gunmen, a special group of the State Attorney General’s Office, and Mexican military units, occurred in the border city of Piedras Negras in the state of Coahuila on Wednesday, March 6.

A policewoman, Maria Guadalupe Delgadillo died during the clashes. Two policemen and civilians were also injured. 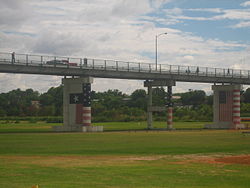 Closed until the dust clears

During the conflict gunmen blocked major roads with trucks – some of them burned – on the Mexican side. As a precautionary measure the U.S. Department of State then closed two border bridges between Piedras Negras, Coahuila, and its neighboring city of Eagle Pass, Texas.

Then on Thursday March 7 in Saltillo, the capital of Coahuila, state police and unknown gunmen were involved in a number of shootings, which began in the early morning and spread throughout the city.

Employees and customers of local businesses near where the incidents took place had to take cover, and local authorities warned citizens to stay inside their homes until the conflict ended.  Schools remained open.

Motorists were affected by the early-morning chase and shooting, in which gunmen threw nails and metal objects into the street to aid in their escape. According to Mexican media, several gunmen were injured, but there was no word of capture.

The two bridges partially reopened around 2 a.m. on Wednesday, and were fully opened by 8 a.m.