Andres Manuel Lopez Obrador (AMLO), who ran as the candidate for the left of centre PRD in last year’s presidential contest, says his team was approached after the national vote to sign a pact recognizing Enrique Peña Nieto (EPN) as president. 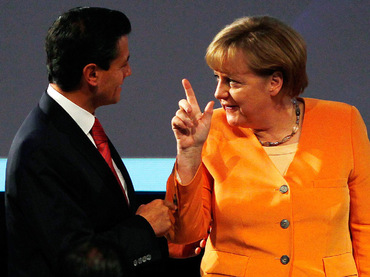 In return, AMLO claims EPN’s centrist PRI party would include PRD proposals in its governing platform.

AMLO, who has since split with the PRD to form a new leftist party named Morena, made his statements during a tour of the southern state of Chiapas. He claimed the offer came between August and September 2012, and that he refused out-right as it would amount to “recognizing a government based on fraud."

Such agreements can occur, asserted AMLO, but only “when there is democracy”. Without it, such an agreement would be “pure demagoguery”.

EPN is finishing up a tour of Chile for the first ever summit of Latin American and Caribbean States (CELAC) and the European Union (EU). Looking like a schoolboy out of his depth while sitting next to the German chancellor, Angela Merkel, EPN rose to the podium and gave a halting speech, passing off the usual bromides about democracy and the need for the removal of uncertainty to secure economic growth.

It was a good time for EPN to be out to the country. Late last Wednesday Mexico's Federal Electoral Institute (IFE) confirmed that the PRI spent over $5 million on cash and gift cards during the presidential campaign. These were spread about to garner votes, but in a close 5-4 vote the IFE ruled that the cards did not necessarily represent campaign violations.