The ongoing feud between the Knights Templar and Jalisco Nueva Generación cartels has turned the area bordering the states of Jalisco and Michoacán into lawless zone where even the police fear to tread.
Over the Christmas holidays seven police officers and at least six gunmen were killed in three shootouts, with eight wounded. The police were attacked by heavily armed commandos, with at least one incident appearing to be a deliberate set-up when Michoacán state police were ambushed while responding to a traffic accident. 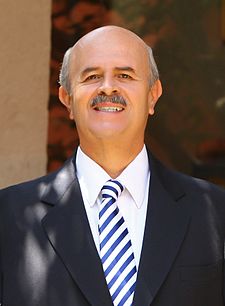 Fausto Vallejo Figueroa, the PRI governor of Michoacán since February, 2012
This happened in Briseñas, with the other two incidents on Quitúpan and Ayotlán. These areas are to the south and east of Lake Chapala, a popular destination for snow birds, and within a few hours’ drive from Guadalajara.

The day after these incidents the central plaza of Yurécuaro, Michoacán, saw a shoot-out between the Knights Templar and Jalisco Nueva Generación cartels, according to authorities. In that incident one innocent bystander was killed by a stray bullet.
Security experts have surmised that as a result of former president Calderón’s all-out attack on the cartels, which began six years ago in his home state of Michoacán and has left over 60,000 dead, Mexico has seen the emergence of smaller – but also more dangerous – “super gangs”. The result is the war we are seeing over a relatively small plaza such as that along the Michoacán/Jalisco border.
Guadalajara itself used to be firmly in the control of the Sinaloa cartel, and a place where even rival kingpins could cool their heels with little worry. Nueva Generación was essentially a street gang that worked for Sinaloa in the state, with Guadalajara as its base.
Now, however, Nueva Generación has a two way fight on its hands against Los Zetas and the Knights Templar Cartel. Knights Templar has always had Michoacán as a stronghold and itself battles the ultra-violent Zetas.
(La Resistencia, allied with Sinaloa and Knights Templar in the fight against the Zetas, is less relevant now that its leader, former Sinaloa strongman Ignacio Coronel Villarreal, is dead. Many elements of La Resistencia have likely folded into Nueva Generación).
The notion that Nueva Generación may be fighting the Knights Templar as well as the Zetas is relatively new, and derives from the extensive violence in the border area. Just last September, 17 mutilated cadavers were found at Tizapán El Alto, Jalisco, directly across state lines. Given that Michoacán is the stronghold of Knights Templar, one can assume their involvement. The move to dump the bodies in Jalisco suggests this is not a fight with the Zetas, and, unless that gesture was a deliberate ruse, it is likely that the target was Nueva Generación.
Nueva Generación made a name for itself in late 2011 when it went down to Veracruz and, calling itself the “Matazetas” (Zetas killers), brutally killed 35 alleged members of the rival Zetas cartel. The message was twofold: we can be as brutal as you, and we can do it in your back yard.
The counter message from the Zetas came two months later when 26 bodies were dumped under Guadalajara’s Millennium Arches monument.
So far, it appears that Nueva Generación, apparently now on the outs their Sinaloa masters, have kept control of Guadalajara, though there are signs that rival gangs are moving in. Just last week five beheaded bodies were discovered in Guadalajara. In Canada or the United States an event like that would capture an extended news cycle – here, few people are even aware. But despite such horrors, including the recent murder of a Venezuelan model, the overall crime rate in Guadalajara has not change dramatically.
What is more worrying is the activity an hour or two away, along the border with Michoacán. The area is essentially lawless. Last month an arts and crafts dealer told La politica he no longer ventures there, and over Christmas a young Catholic priest went missing.
(TE Wilson is the author of Mezcalero, a Detective Sánchez novel.)