“Josefina” closes in on Peña Nieto, and president Calderón calls for a unified response to crime

It's a bit of a shocker.

We reported recently in a lengthy post that Josefina Vasquez Mota of Mexico’s National Action Party (PAN) was a stalker candidate, ready to take out the current favourite Enrique Peña Nieto of the Institutional Revolutionary Party (PRI).

In indulging in such punditry, we knew we were a voice in the wilderness.

Why? Because up until now Peña Nieto has had a huge lead in the polls. In November of last year he had a 25 point lead over Vasquez Mota , with  44% of those polled supporting him, compared to only 19% for Vasquez Mota.

This seemed insurmountable, particularly when considering Mexico’s hugely unpopular “war on drugs”, an initiative of the PAN president Calderón, which Vasquez Mota has said would continue under her presidency.

Would anyone choose her to pick up this level of support? We did, because we knew that upon examination Peña Nieto would reveal himself as being woefully inadequate. 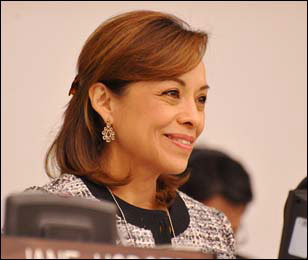 Something to smile about

But, given the past two elections, there has to be a wall of sorts where die-hard PRI support kicks in.  What we do know is that that level has, historically, been below what was required to ensure victory for the PAN. In other words, if Vasquez Mota can capture that support, and particularly if she can get the younger demographic, she will win.

This is the first time that the distance between Vasquez Mota and Peña Nieto has been in single digits.

The poll shows Andres Manuel Lopez Obrador from the leftist Party of the Democratic Revolution  (PRD) in third place with 17% of potential voters preferring his candidacy.

The study was carried out between February 17-19th by polling 1,000 people in their homes; it has a margin of error of 4 percentage points.

Mexicans will go to the polls on the 1st of July to choose a new president. The PAN has been the governing presidential party since 2000.

The PRI is trying to regain the presidency which it lost in 2000 after seven consecutive decades of executive rule. As readers of La politica es la politica already now, we don’t think they are ready, particularly with Peña Nieto at the helm. 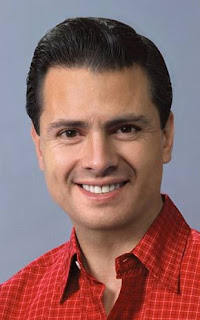 The PRI leader Peña Nieto. "Gel Boy" is not up to the job.

President Calderón called on all countries in the Americas to create a united front to combat money laundering as a way of cutting the flow of financial resources to organized crime syndicates.

Calderón Hinojosa claimed that it was the only way that governments will be able to weaken criminal networks.

While inaugurating the Hemispheric Meeting against Transnational Organized Crime, Felipe Calderón affirmed that the sale of weapons in the United States in directly related to the levels of violence in Mexico.

“In the last five years alone, we have seized 140,000 weapons from criminals, 84,000 of which have been assault rifles, AR-15s, and AK-47s. Certainly they haven’t all been manufactured in the United States, but 80 percent of them have been demonstrably sold in US gun stores,” said Calderón.

From the office of the Secretary of Foreign Relations (SRE), Calderón Hinojosa stated that organized crime elements are looking for territorial control of communities in order to take over all illicit and legal earnings available.