Who was Miguel Nazar Haro?

Nazar Haro, one of the officials considered responsible for the infamous Tlatelolco massacre in 1968, died at around 9 pm, presumably of natural causes.

Another more specific accusation was that Nazar Haro was responsible for the disappearance of Jesus Piedra Ibarra, son of Senator Rosario Ibarra de Piedra. Piedra Ibarra, who was active in the September 23 Communist League, was arrested in April 1975 in the city of Monterrey, and never heard from again.

Despite significant evidence against Nazar Haro, in 2006 he was released by a federal judge and never completed a prison sentence for his crimes. Specific to the Piedra Ibarra case, the charges he faced were of “illegal deprivation of freedom” which, legally speaking, would have been considered akin to kidnapping.

However, as in other cases, time out-ran on the legal efforts to have justice reach Nazar Haro.

Other high level government officials who have been implicated in Mexico’s dirty war are: the former President, Gustavo Díaz Ordaz (in office 1964-1970) ; Luis Echeverria (Interior Secretary under President Gustavo Díaz Ordaz from 1964 to 1970, then president from 1970-1976): General Marcelino Garcia Barragan (Secretary of Defense during the Tlatelolco massacre; and Fernando Gutierrez Barrios (obituary here), the director of the DRF during the Tlatelolco massacre. 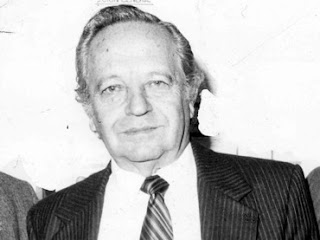 Protected by the CIA?

Back in February, 2004, Milenio reported that Nazar Haro had received help from the Central Intelligence Agency (CIA) and the U.S. Justice Department to avoid incarceration in the U.S.

But this wasn’t because he was “disappearing” leftists: apparently, he was under investigation for participating in a car theft ring.

In an interview with Milenio, Peter K. Nuñez, the former U.S. Attorney in charge of the case in San Diego, California, said that when he tried to arrest and prosecute Nassar Haro in the early 1980s the “intelligence agencies” in Washington intervened.

“It was a very complicated circumstance.  We [in San Diego] had spent considerable time trying to charge him, and the Justice Department in Washington and some of the U.S. intelligence agencies did not want us to go ahead,” Nuñez said.

Apparently, Nuñez believed the CIA got involved to influence the escape of Nassar Haro from the U.S. after having after spent only a few hours in a San Diego jail.

The CIA considered Nassar Haro, according to different reports, “the most important source in Mexico and Central America” for the U.S. espionage services.

However, it looks as if upon his death in Mexico there was still an outstanding warrant for his arrest in the United States. Even decades after being indicted in a federal court for his alleged participation in an organization dedicated to stealing vehicles in San Diego, Nassar Haro would still have been considered a fugitive from justice.

“Arrest warrants do not expire,” said Nuñez.  “He paid his bail but he never returned to face the charges.”


Also, if you have read this far, perhaps you would support our efforts? We do this for free. Supporting La politica es la politica is easy - simply click on the "donate" button on the upper right-hand side of the page. We are talking small generosities, not big bucks. As a heads up, Pay Pal will insist that you use it if you are already on account. For direct credit card payment, you will then have to use a number and email that Pay Pal doesn't recognize in order to escape their benevolent grasp.
Posted by TimothyEWilson at 11:54