The following come from press reports in English and Spanish:

CNN.com: "... more than 5,300 people ... have gone missing in Mexico since President Felipe Calderon began a crackdown on cartels five years ago, according to the country's National Human Rights Commission. Officials fear the total number could be far higher, because many disappearances go unreported. The drug war's mounting death toll grabs international attention, but forced disappearances are one of the most troubling problems that Mexico faces, says Rodrigo Escobar Gil, a human rights representative for the Organization of American States.

As the number of cases grows, ... parents of the missing have become vocal members of the country's high-profile Movement for Peace with Justice and Dignity, which has staged nationwide protest marches demanding a new drug war strategy, better treatment of victims and greater efforts to find the missing."

Milenio: "Antonio Nogueda Carvajal, the lawyer for the two state ministerial police, Rey David Cortés Flores and Ismael Matadaza Salinas, announced that if his clients are issued arrest warrents for the presumed murders of the two normal school students, he will make an appeal to federal court to stay the charges.

"We have expert evidence, carried out by the federal Attorney General's Office, that indicate that the weapons of the two ministerial police were not fired. We also have X-ray evidence taken by the Public Ministry police of the state attorney general's office that turned out negative," he stated. He added, "We have other evidence, that we will have to reveal within the legal process, that the state attorney general, Juan Manuel Herrera Campos, only wants to justify on the part of the government, before society, that he is doing his job, but it is affecting not only two people but also their families"

The lawyer said that the two ministerial police have been summoned to appear before the first criminal court of the city of Chilpancingo this Monday afternoon at 6:30 P.M." 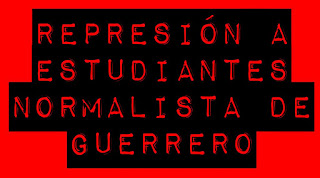 Milenio: "Under the discretion of the law, the attorney general of the state of Guerrero released from detention four members of the state ministerial (investigative) police and six members of the preventative police who, on Saturday afternoon, left the detention facility where they had been held for 28 days.

Their liberation occurred simultaneously with the announcement by the Guerrero prosecutor that he is making criminal charges against two ministerial police, Rey David Cortés Flores and Ismael Matadama Salinas, inidicating that they are probably responsible for the murders of normal school students Alexis Herrera Pino y Gabriel Echeverría de Jesús.

The four members of the ministerial police arrived at the scene on December 12 to verify what was happening on the federal highway between Acapulco and Mexico City. At the Attorney General´s Office shots had already been heard that were discharged by Federal Police. The six members of the Preventative Police were part of the body guard of former under-secretary of public security, Ramón Arreola Ibarría (whom the governor removed from office--along with the secretary for public security and the state attorney general--the day after the incident).

These ten police have maintained their positions and can return to their jobs, as they have not been found guilty of the deaths of the students."

La Jornada: Visitors from the National Commission on Human Rights (CNDH) undertook the reconstruction of the December 12 police action in the Highway of the Sun, which killed two students from the Rural Normal School of Ayotzinapa . Aided by members of the Federal Police (PF) and the use of mannequins that simulate the bodies of Jorge Alexis Herrera Pino and Gabriel Echeverria de Jesus, the students killed, two experts in ballistics used lasers to simulate the trajectory of the bullets that killed the two students.

The survey was conducted Thursday night by criminal investigation experts Ricardo Sandoval and Alejandro Coronado. The head visitor, Luis Garcia Lopez Guerrero, announced Friday that based on this expertise, "it is confirmed that the weapons causing the death (of the students) were fired from west to east, i.e., from where the ministerial (investigative) police were.

On Friday Lopez Guerrero led a delegation of 20 inspectors of the CNDH, lawyers and experts who heard the testimony of nine students were injured during the police action. The head visitor reported that it has not completed its investigation and does not rule out subpoenaing state and federal officials to testify, including the Secretary of Government of Guerrero, Humberto Salgado Gomez, and federal Secretary of Public Security, Genaro Garcia Luna.

He expressed regret that 32 days after the event, with 31 people aggrieved, two dead, one tortured, four with bullet wounds, the driver of a tractor-trailer wronged, an entire community offended because of this, there isn't a single public servant of the Mexican State subject to criminal prosecution.

The delegation of the National Human Rights Commission visited the school and was received by Pablo Juarez, a student leader who led a tour of the campus facilities: bedrooms, bathrooms, kitchen and soccer field.

... About the statement of the former attorney general of Guerrero, Alberto Lopez Rosas, that the preliminary report of CNDH is biased, Lopez Guerrero said, " We have pointed out very forcefully that the first authority to arrive at the scene was the Federal Police. They are the ones who started the problem by launching a tear gas grenade. Although the bullet casings have not been found, among other things, and there was contamination of the scene, the expert opinions regarding the wounds of those who died leads to a primary conclusion that we may be certain that the shots came from where the ministerial police were located. With a high level of possibility, even certainty, it may have been them who shot and, at that moment, caused the death of students and injuries to others."

BBC News: "One day after his inauguration, Guatemalan President Otto Perez Molina has ordered the army to join the fight against drug cartels. Mr Perez Molina, who is a retired general, called on the military to "neutralise organised crime". Officials say the police in some areas of Guatemala have been infiltrated by drug gangs.

Guatemala is following the example of Mexico and Honduras, where the military is also tackling the drug gangs. President Perez Molina, who is the first military figure to lead Guatemala since the return to democracy in 1986, has promised tough action against violent crime and drug trafficking."

Now, as violence between Mexican drug traffickers and security forces pushes the drug war's five-year death toll over 45,000, the Roman Catholic bishop is taking on the government. He claims that corrupt officials are allying with criminals to skim drug profits and using the military to murder criminals who might reveal any collusion."

Mexico Rule of Law: Murder Impunity at 90% in Some Areas of Mexico

Justice in Mexico: "According to a new study on rule of law in Mexico, impunity runs rampant throughout the country. Guillermo Zepeda, a professor at Instituto Tecnologico y de Estudios Superiores de Occidente (ITESO), was stirred by the lack of response to investigations of murders in Mexico. To combat the culture of acceptance to impunity, Zepeda authored a study to measure the level of impunity for murder in Mexico. His findings were dismal were that in 2010, 80% of homicides in Mexico went unpunished without trial or conviction."