Fox News Latino: "Only days after taking office on the promise of an "iron fist" approach to security, Guatemalan President Otto Pérez Molina called for a discussion about decriminalizing drugs.

The former general argued on Mexican television that a regional strategy for decriminalization should be looked into as soon as possible. “Here we are speaking from the southern area, where it occurs, through all the countries like Guatemala that are transit points to Mexico and the United States," Pérez Molina said, according to El Nuevo Heraldo newspaper.

Pérez Molina added that Mexican President Felipe Calderón had made a great effort in combating drug trafficking, but criticized the United States for not matching Mexico’s effort and for being the world’s largest drug consumer." 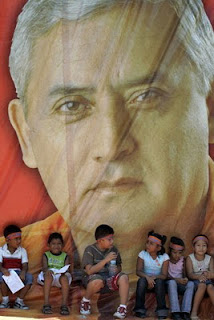 Calderón meets with CIA Director to discuss the security agenda

According to a statement issued from the Office of the President, Calderón and Petraeus discussed “different topics in the bilateral agenda and agreed to continue strengthening ties in the area, driven by both governments.”

The ITT List: "While the Republican presidential candidates try to shoot down Mitt Romney before it's too late for them, their conservative counterparts in Mexico held a relatively genteel debate on Tuesday about the future of that country, including the U.S.-backed drug war that has claimed over 40,000 victims since 2006. Three "pre-candidates," as they are called, are competing for the nomination of the right-wing National Action Party (PAN), which will hold an internal election on February 5th. The general election is July 1st."

... The PAN's candidates are holding firm... in their insistence that (the war against the cartels) continue. Josefina Vázquez Mota, a former Secretary of Education and the front-runner for the nomination, recently said that "there will be no. . .truce with organized crime" if she is elected. One of her rivals, Senator Santiago Creel, has proposed continuing the struggle under a centralized Anti-Organized Crime Agency. The third candidate, ex-Secretary of Housing Ernesto Cordero, said he wants to lengthen the prison sentences of people convicted of drug-related crimes."

Milenio: "The U.S. ambassador (to Mexico), Anthony Wayne, emphasized the support of the Merida Initiative is providing to reduce the demand for drugs in Mexico by providing $18 million for the National Network Against Addictions and New Life  Centers.

The diplomat met Tuesday with the first lady, Margarita Zavala, at the official residence of Los Pinos, to talk about drug policy and support for young migrants. After listening to Zavala talk about how the New Life Centers help families better cope with the problem of drug abuse, Ambassador Wayne said "there is no doubt that New Life has saved many lives and changed so many countless others. We are proud to support this campaign through the Merida Initiative. "

The New Life campaign includes prevention and education at different levels for millions of children and adolescents as well as training for more than half a million health workers, teachers, coaches, and other first responders to drug abuse."


Also, if you have read this far, perhaps you would support our efforts? We do this for free. Supporting La politica es la politica is easy - simply click on the "donate" button on the upper right-hand side of the page. We are talking small generosities, not big bucks. As a heads up, Pay Pal will insist that you use it if you are already on account. For direct credit card payment, you will then have to use a number and email that Pay Pal doesn't recognize in order to escape their benevolent grasp.
Posted by TimothyEWilson at 09:52