Mexico’s biggest solar power farm up and running in Jalisco


Authorities in the state of Jalisco, working alongside the federal government, have inaugurated Mexico’s largest collection of solar energy panels.

Juan Rafael Elvira Quesada, the federal  Secretary of Environment and Natural Resources, announced that  the cost of electricity coming off the farm will be frozen for the next 20 years in order to ensure a steady supply that has market viability.

Speaking from Conafor headquarters (the Comisión Nacional Forestal, or National Forestry Commission) located in the Zapopan municipality within the city of Guadalajara, the secretary stressed that the Secretariat for the Environment and Natural Resources (Secretaría de Medio Ambiente y Recursos Naturales, or Semarnat) has become an icon for the implementation of solar technology in Mexico.

Conafor director Juan Manuel Torres Rojo highlighted the great visual, environmental, and social impact that this new system of photovoltaic (PV) solar energy provides. He also noted that it was an efficient way to create energy.

He said that the energy savings due to this solar system is equivalent to average daily intake of 418 dwellings, and reduction of about 18 tons of carbon dioxide per year.

In total, the new solar stations are distributed over an area of ​​1,155 square meters. There are also 1,420 square meters of photovoltaic cells installed on two Conafor buildings. 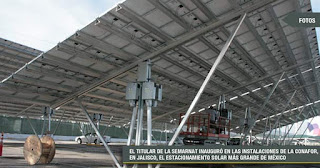 In a second stage of the project, Conafor will install an additional 2,000 square meters for photovoltaic cells, meeting 100% of the electricity needs of the four buildings at headquarters.

This solar energy production system, which is based on German technology, consists of 368,000 crystalline silicon PV modules and 147 inverters, with the metal infrastructure being made of aluminum.

For the press release in Spanish, go here.