La politica es la politica has posted 32 articles - one for each state in Mexico, including Mexico City - in advance of the July 1, 2018, presidential election. For links to all 32 articles, scroll to the bottom of this post.

The state of Guerrero is located in Southwest Mexico, and is home to the resort city of Acapulco, its largest city, as well as the popular tourist destinations Zihuatanejo and Ixtapa. Its capital city is Chilpancingo, and its population about 3.5 million.

Despite its popularity with tourists, Guerrero has always been a violent place. During the 1970s it was a hotbed of leftist guerrilla activity, and beginning in the 1980s drug cartels have used farmland in Guerrero to cultivate marijuana and poppies.

On September 26, 2014, 43 male students from the Ayotzinapa Rural Teachers' College were forcibly taken then disappeared in Iguala, Guerrero. This made headlines around the world, as did the government’s bungled investigation. The case remains unsolved, but it appears that local officials were upset at the students, who were planning to commandeer several buses to travel to Mexico City to commemorate the anniversary of the 1968 Tlatelolco Massacre. It is believed that local police took the students into custody, and then handed them over to the Guerreros Unidos ("United Warriors") gang, who then killed them.


Though the mass murder of the student teachers made international news, the reality is that for many years now, day in and day out, Guerrero has been a dangerous place. It is a poor state, which makes the local populace, particularly young men, easy prey from criminal organizations. As of May 31, Guerrero is the second most violent state in Mexico, with 770 murders, behind Baja California (834) and marginally ahead of Guanajuato (768).

Politically, perhaps due to its poverty, the right of center National Action Party (PAN) has never had much success in Guerrero. The governor is from the Institutional Revolutionary Party (PRI), which ruled Mexico for most of the 20th century, and is also the party of President Enrique Peña Nieto.  Of the three federal senators, two are from the left-of-center Party of the Democratic Revolution (PRD), and third is from the PRI.

Guerrero is no stranger to political violence, and this campaign is no different. Since September, as of this writing, 19 politicians have been murdered in the state.

Most recently, on May 31 Rodrigo Salgado Agatón, 23, who was running for municipal council under the PRI banner in San Marcos, was shot and killed. This was obviously a targeted crime: Salgado was riding in a vehicle with campaign workers near the town of Plan de los Amates when they were attacked by an armed group in another moving vehicle. Salgado, who was also regional coordinator for the senatorial campaign of Manuel Añorve Baños, former mayor of Acapulco, was the only person hit in the attack. 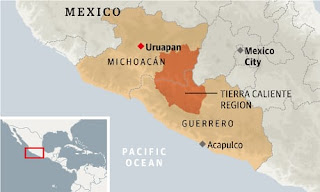 As well, earlier in May Abel Montúfar Mendoza, a PRI candidate for state congress, was shot by unidentified assailants on the road between Ciudad Altamirano and Coyuca de Catalán. This is in the notoriously insecure Tierra Caliente region, which rises inland in central Guerrero up into the Sierras and the border with the State of Mexico.

Montúfar, who had previously complained of death threats, had taken leave as mayor of Coyuca to contest the July 1 elections. He was seeking a congressional seat to represent four Tierra Caliente municipalities. The seat is currently vacant because its holder is on the lam on homicide charges. The interim congressman was murdered in April last year.

In these circumstance, how can a democracy possibly function? The situation so bad that the governor of the state, Héctor Astudillo Flores, has distributed a risk map designed to warn candidates about campaigning in certain parts of the state.

The insecurity in rural Guerrero, as in neighboring Michoacán, has resulted on local citizens organizing civil defense forces. These organizes are usually legitimate responses to the failure of the state to provide security or, worse, that active collusion of local law enforcement with drug cartels. On occasion, criminal groups themselves attempt to pass themselves off as civil defense groups.

This is relevant to the July 1 election because Morena, the left-of-centre political party headed by leading presidential candidate Andrés Manuel López Obrador (AMLO), has named Nestora Salgado García, a former commander of a community police force, as a senatorial candidate.

Salgado was arrested in 2013 and charged with kidnapping and with being affiliated with organized crime. The arrest was seen by many as being politically motivated. Salgado spent two years and seven months in jail before the Mexican courts, in a series of judgments, declared her innocence.

During the campaign, the federal candidate for the PRI, José Antonio Meade, cast aspersions on Salgado, AMLO, and Morena, asserting that his political opponents on the left were sanctioning disrespect for the law. The effort appears to have backfired: AMLO defended Salgado’s candidacy, and maintained his lead in the polls.

One of the main sources of violence in Guerrero is the fact that the Mexican government’s “kingpin” approach to the war on drugs has resulted in a splintering of criminal organizations vying for control of opium plantations in the Tierra Caliente. This has resulted in brutal conflict, and a complete breakdown in law and order, as was seen in early May when nine food vendors were kidnapped and murdered.

Back on April 17 armed civilians clashed with security forces, leaving 16 dead – including six police officers. This occurred near the resort town of Zihuatanejo after the police were attacked by an armed group. And during the month of April four police officers, including the police chief, were murdered in two incidents in the small town of Chilapa, one of Mexico’s most violent communities. The bishop of Chilpancingo, Salvador Rangel, visited Chilapa in early April to plea for a truce between warring factions, at least during the election season. The bishop claimed that gang leaders agreed not to kill any more candidates for election, but it appears to be of no avail.

Within such high levels of insecurity, the local population is suffering. It is impossible to address pressing issues such as water contamination, underfunded education, and healthcare delivery. In some areas, schools have closed, with doctors unwilling to travel to medical clinics. Most of the trouble is in rural areas, but the city of Acapulco has for years now been experience record levels of violence, and 2018 is turning out to be worse than ever – in April alone 100 people were murdered in Acapulco. Even the clowns are protesting.

Is there any good news from Guerrero? Well, at the end of March two new stretches of highway in the Zihuatanejo-Ixtapa corridor were officially opened.

So what happens when it comes to federal election? PAN candidate Ricardo Anaya will have lukewarm support in Guerrero, particularly after the PAN’s cynical alliance with the PRD, which has been in a free-fall since AMLO left to form Morena. The PRI candidate José Antonio Meade could usually expect to do reasonably well in Guerrero, but not this time around, as the PRI can’t legitimately claim after six disastrous years of corruption and violence, and the bungling of the Ayotzinapa investigation, to have the interests of the people of Guerrero at heart.

That leave us with Andrés Manuel López Obrador. AMLO should clean up in Guerrero, but there is of course one caveat: there are rural areas in Guerrero where the people are so fatigued and frightened, and the system so marred by violence and corruption, that they may not vote at all.


Below are the links to the posts for each state: