Mexico City, June 30. It was May 11, less than two months before Mexico’s July 1 presidential election. Enrique Peña Nieto of Mexico’s Institutional Revolutionary Party (PRI), which ruled Mexico from 1929 until 2000, was well ahead in the polls. He strolled in to have a chat with some middle class students at the private Ibero-American University in Mexico City.

He expected an easy ride. After all, these weren’t the rabble rousers from the National Autonomous University of Mexico. These affluent students would be tired of the ruling National Action Party (PAN), which had plunged Mexico into a drug war that had claimed over 55,000 lives. And they certainly weren’t leftist supporters of the Party of the Democratic Revolution (PRD).

But what Peña Nieto got was a very rough ride indeed. The students heckled him. They mocked him. They faced him behind masks of the notoriously corrupt Carlos Salinas de Gortari, the PRI president from 1988 to 1994.

Peña Nieto went and hid in the washroom. As his handlers hustled him away, hundreds of students openly accused him of corruption and a poor track record when he was governor of the State of Mexico, the country’s most populous.

Videos of the event went viral. Peña Nieto’s team accused the hecklers of being leftist plants. 131 Ibero students countered with YouTube videos showing their university ID cards. The news began trending on Twitter, with young people around Mexico – and the world – claiming solidarity as the 132nd dissenter. #YoSoy132 (I am 132) was born. 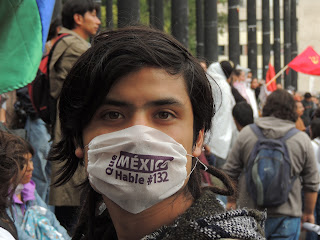 The movement didn’t stop there. It pressed its three main demands: security and human rights; education; and the democratization of the media.

#YoSoy132 activists responded by demonstrating in front of the media companies’ offices. Result? The second debate was broadcast nationally.

The momentum has continued. At a press conference on June 26th in Mexico City, representatives of #YoSoy132 announced the launch of “Estamos Observando” (We’re watching), a web-based initiative to collect photographs of voting irregularities.

At the same conference Pablo Amilcar Sandoval Bellesteros, the strategic coordinator of another website allied with #YoSoy132 that tracks irregularities, “Todos Contamos” (We all count), presented a report indicating that the PRI had been responsible for 85.4% of all probable election offenses.

As well, representatives from #YoSoy132 made it clear that they would be acting as ad hoc on-the-ground observers.

But the #YoSoy132 movement has faced its own challenges. It is still small, and social media has limited effectiveness in Mexico, where only 22% of the population has Internet service. Cellphone penetration is much higher, but many Mexicans aren’t able to pay for data plans that would give them heavy access to Twitter and Facebook. As in Canada, Mexico’s telecommunication’s market is pricey, with a few providers having heavy influence on regulators.

Television is even worse. In Mexico, 95% of television is controlled by the Televisa/TV Azteca duopoly.  This is where most Mexicans get their news, yet the airwaves have been saturated with pro- Peña Nieto messaging for months. The Guardian newspaper recently reported what many Mexicans have long suspected, which is that the PRI may have been offering direct payoffs to the networks.

#YoSoy132 has no option but to fight where it really counts, in the streets. However, during the closing rally for the PRD on June 27, in which hundreds of thousands of supporters appeared in Mexico City’s central square, the #YoSoy132 presence was minimal, suggesting that the middle class students on Twitter were not crossing over to a more populous base.

That could have been the end of #YoSoy132, too, in that June 27 was the last day that parties could legally campaign.  Though #YoSoy132 is not technically a political party, it is specifically campaigning against one party, the PRI.

But the group was given a breather of sorts from Alfredo Figueroa Fernández, the head of Mexico’s Federal Election Commission, who ruled that #YoSoy132 can stay active during the four days leading up to the election. That means that the group’s “six days to save Mexico” campaign, which includes numerous public demonstrations across Mexico, can run full out until election day. 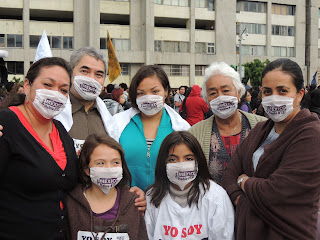 The post-election response by #YoSoy132 will be critical. The group has deliberately avoided acts that might turn the public against it.  No blocking streets, no graffiti on shop windows. But a PRI win will almost certainly see protests, particularly in Mexico City, a PRD stronghold.

Most polls put Peña Nieto with a 13 to 18 percent lead over Andrés Manuel López Obrador of the PRD. (The ruling-party, right-of-centre PAN candidate, Josefina Vazquez Mota, is running a distant third).

But Peña Nieto’s lead is hardly cozy, as it still places him close to the “corruption window”.

“Between 10 and 13 percent of the votes in this country are bought,” says Edgardo Buscaglia, a law professor in Mexico. “These are not my numbers – these are the Federal Electoral Commission numbers.”

Buscaglia, who spoke in private to representatives of #YoSoy132 at Mexico’s Human Rights Commission on June 27, argues that for the movement to have post-election relevance it has to maintain a strong physical presence.

“If you want changes in the rules of the political game you need to have social movements in the streets,” he says. “You need to surround institutions with specific proposals and demands.”

#YoSoy132 certainly did that when it challenged the Federal Electoral Commission and Mexico’s television duopoly, but it is unclear how large the mobilization will be at the voting booth.

On June 30, the eve of the election, about 80,000 #YoSoy132 supporters gathered at the “Plaza of Three Cultures” at Tlatelolco. They marched first to the Televisa offices, and then to the city’s central square, the zocalo.

It was a remarkable event. La politica was there, and can attest that despite passionate protestors – among them black flag anarchists and victims of state-sponsored violence – the four-hour march stands as a model on how dissent can empower people, get the message out, and be a lot of fun.

It helps that 90% of the protesters were under thirty, and 99% were under 40. Mexico is a young country, and the youthful exuberance of the march on June 30 was infectious. The singing was loud, the mockery extreme. Poetry was read to riot police, and torches were lit from political signs. 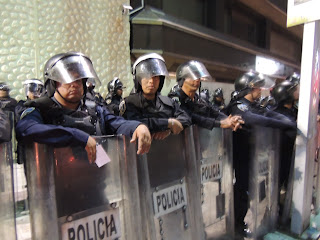 Bored riot police in front of the Televisa offices - June 30

But not a bottle was thrown, nor a window broken. The riot police – unlike in Quebec City, or more recently Toronto – were few, and weren’t behind barriers. You could photograph, you could sing, you cold pantomime and play the musical instrument of your choice: drum, accordion, conch.

There is a reason, of course, why this all went smoothly. Mexico City is a PRD town. The protestors are supporters of the city government. It is Peña Nieto’s national support that has people in the capital feeling low.

It also helps that Mexico City is dry for two days. No liquor the day before or the day of the election. There was, however, plenty of marijuana smoke wafting through the air during the demo.

But at the end of the day, despite the fact that Mexico has over 79 million voters between 18 and 29, it could be that as few as 25 percent will show up to cast their ballot.

That would be a shame, because that 132nd vote could change Mexico – forever.

(An earlier, shorter version of this article originally appeared at Rabble.ca.)