June 17. A lawyer known for defending indigenous rights, and a well-known indigenous activist, were found dead in seemingly unrelated murders in the State of Oaxaca over a 72 hour period.

The body of Sergio Garcia Vazquez, a lawyer who worked actively to defend indigenous rights, was found Sunday at 206 kilometer mark of the highway between state capital, also called Oaxaca, and Nochixtlán. 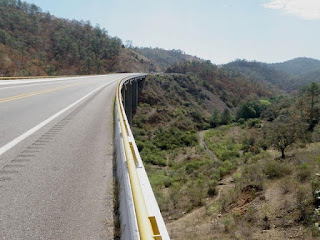 The highway where Garcia Vazquez was found

Garcia Vazquez had been kidnapped 18 days before and, as is often the case in such incidents, his body was found with signs of torture. He had been shot in the head execution-style.

The kidnapping had been reported by Garcia Vazquez’s family to the state attorney general’s office (PGJE). Though a spokesperson said that the government would “exhaust all lines of inquiry” there appear to be no suspects at present.

The government is looking into the cases that the lawyer was working on to see if there was any connection. At present, all that is known is that Garcia Vazquez travelled by private vehicle to a commercial establishment in the city of Oaxaca directly before his kidnapping.

As well, on Friday, June 15, in the Sierra Norte de Oaxaca the indigenous leader and activist Severiano Hernandez Mendez was assassinated.

According to the police report, the victim was attacked by unidentified men who violently entered his home located in Asuncion Lachixila (population, 446), in the municipality of Santiago Camotlán. This is a “microregion” – a small corner of dwellings bellow the Sierra Juárez mountains.

The attackers shot him in the head three times. A note was left on a shoebox that said "“Vamos a limpiar todos los insectos”  (We'll clean out all the insects).

During Diodoro Carrasco's term as governor, Hernandez Mendez was accused of being connected to guerilla organizations.

The unproven and possibly politicized allegations were that Hernández Méndez had been a leader of the Popular Revolutionary Army (Ejército Popular Revolucionario, or “EPR”), but when the Zapatista (Zapatista Army of National Liberation , “EZLN”) movement grew in relevance he worked under Sub Commander Marcos. Within the Zapatistas he was allegedly known as “Commander Emiliano”.

Activists in Oaxaca have been exposed to increasing violence in 2012.

Earlier this year, on March 15th, Bernardo Vásquez Sánchez, an indigenous Zapotec community leader from San José del Progreso, Oaxaca, was murdered in an ambush by a group of three gunmen.

Bernardo was an outspoken leader against the mining operations of Vancouver-based Fortuna Silver Mines in San José del Progreso, known locally by the name of its Mexican subsidiary, Minera Cuzcatlán.

N.B.: If you are having difficulty submitting to the e-mail feed at the top of this page, press "enter" on your keyboard instead of the "submit" button.
Posted by TimothyEWilson at 18:02