June 14. Mexico’s president President Felipe Calderón has told the The Wall Street Journal that his country’s drug-related murders fell about 12% during the first five months of 2012, the first decline in eight years.

Mr. Calderón said that non-governmental organizations had requested that is government not release  specific numbers, because to signal in advance that a crime is “drug related” could prejudice cases before the courts. 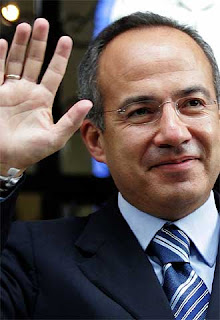 In determining if a murder is drug related the government relies upon evidence at the crime scene that distinguishes these crimes from common murders. In a drug-related murder, for example, the victim may have been tortured, killed “execution style”, and decapitated.  Rival cartels also often leave notes.

Though Mr. Calderón could be seen as being biased, his numbers fit with estimates from national newspapers in Mexico that keep their own tally, and which have also observed a recent decline.

The government's count of deaths linked to drug gangs in the past few years has usually been about 25% higher than that of newspapers. Through to June 9 of this year, Reforma newspaper counted 4,747 dead from the drug war, trending for an annual total of about 10,000 deaths. That compares with last year’s total of 12,366.

Sadly, the good news must be understood in the context of the truly horrific numbers from the past two years.

About 16,800 people were killed last year in drug-related violence. That compares to 15,273 drug-related murders in 2010. Overall, it is estimated that over 60,000 people have died since Mr. Calderón assumed power in December, 2006.

The overall murder rate also appears to be in decline. There were 4,998 murders in Mexico during the first quarter of 2012, a decline from 5,377 during the same period in 2011. However, this is still higher than 4,661 murders in the first three months of 2010.

Directly after taking office, Mr. Calderón began an aggressive strategy against the drug cartels, sending the army into dozens of states and even patrolling major cities such as Juarez, Veracruz, and Monterrey. Human rights organizations have said that this militarization not only intensified the conflict, but also resulted in serious abuses on the part of the military toward civilian populations.