During a press conference on the White House lawn on April 2nd Mexican President Felipe Calderon referenced the arrest of Canadian Cynthia Vanier in an alleged plot to smuggle fallen Libyan dictator Moammar Gaddafi’s third son, Saadi, and his family from North Africa to Mexico.

“The security of North America is absolutely tied to each of its member states. There cannot be full security in this country or in Canada or in Mexico if we do not have a system that actually enables the cooperation mechanisms to act in facing threats that have no borders and that are transnational by their very nature, and these are the threats that are not just tied into drug trafficking which is transnational, of course.”

This then set up a dramatic declaration providing clear evidence that the trial against Ms. Vanier has become heavily politicized. In the context of the above statement, Mr. Calderon then said:

“And I’ll give you two examples of success stories I was mentioning this morning. One, the attempt to take to Mexico one of the children of Gaddafi, one of Gaddafi’s children. This implied an international and very North American operation, because it was headed up by a Canadian business woman, who hired an American company, which hired in turn Mexican pilots and counterfeiters, and this multinational operation could have been – would not have been avoided without international security mechanisms that we didn’t have before and now we have. Also, being able to avoid the assassination of the Saudi ambassador here in Washington would not have been possible without the mechanisms of cooperation we have today.” 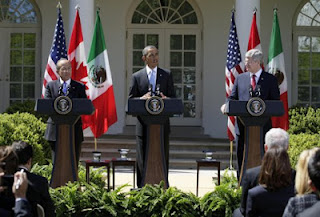 Mr. Calderon failed to mention that none of the four individuals imprisoned in Mexico and facing charges with regard to the alleged Gaddafi plot had been found guilty of any crime. He states very clearly that the plan was “headed up by a Canadian business woman”.

Strangely, Mr. Calderon’s argument that the supposed plot is uniquely North American does not seem to carry much weight with his peers in the United States and Canada, despite his grand-standing in Washington.

If it did, then the United States would have filed charges against the American Greg Gillispie, who helped broker the plane deal for Cynthia Vanier to fly to North Africa. And Cynthia Vanier herself, who handled all the money for the alleged operation through her Canadian business, would surely now be wanted by the RCMP.

Instead, the RCMP has yet to file any charges against Ms. Vanier – despite an investigation that has now gone on for months.

Mr. Calderon went on to say –

For his part, Prime Minister Harper’s silence on the matter only served as passive acceptance that what Mr. Calderon said was true.

But if it is true, then the Canadian government should be actively pursuing the financiers and intellectual authors of the crime, who would not be Cynthia Vanier. As La politica has previously reported, Ms. Vanier was receiving far more for her work than the $100,000 successfully invoiced to the Canadian engineering firm SNC-Lavalin.

If what Mr. Calderon says is true, then why are his neighbours not discussing the matter, or building their own cases?

What seems obvious is that Mr. Calderon has now placed much of his diminished political capital on Cynthia Vanier staying in a Mexican prison. The chances of a fair judicial process before the July 1st presidential election, and perhaps even before Mr. Calderon’s official departure on December 1st, are much harder to come by now that Mr. Calderon has stated in such a high profile press conference that the arrest of Cynthia Vanier is one of the great successes of his administration.

To see a video of the comments made by Mr. Calderon, with English translation, go here.

(N.B. The mainstream press completely missed this story. The Globe and Mail, after being in contact with La politica, ran with this post.)