Aleph Jiménez, the #YoSoy132 activist who went missing last week, has come out of hiding in the Mexican city of La Paz, near the bottom of the Baja peninsula on the Sea of Cortez.

He then went to the capital, Mexico City, to give a statement to the National Human Rights Commission.

Jiménez claimed he went into hiding out of concern for his safety. He asserted that two of his colleagues had been murdered, and alleged that he had being followed by an unidentified car, and had his phones tapped.

La Paz is over 1,000 kilometers south of Ensenada, Baja California, where Jiménez lived. He claims that he did not notify anyone of his whereabouts due to fear of being tracked. However, after realizing the extent of public attention that this case has caused, he decided to go public. 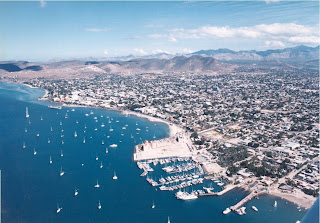 For now, Jiménez has said he will not return to his hometown.

Response on the net has been mixed. Many are relieved to hear of his safety, while others are suspicious, and accuse him of grandstanding to draw media attention to himself.

The fact that Jiménez hitch-hiked in his travels, for example, is seen by some as proof that his life could not really have been in danger: otherwise, why choose such and exposed and risky mode of travel?

Then again, if he was afraid of the State it might make sense to avoid any traceable means of transport. It also might be slightly unfair for those in more secure positions to judge the seemingly irrational behaviour of someone who was truly terrified.
Posted by TimothyEWilson at 14:16