The recent decision by Canada to cut diplomatic ties with Iran, and the arrest of three alleged Hezbollah operatives in Mexico, are evidence that the Americas are very much in play when it comes to the threat of Islamist terror.

And though much ink has been spilled on the meaning of these events, and whether or not they reflect an increase in the overall terror threat, the background story is more rhetorical than material: when it comes to diplomacy, words matter.

In the case of Iranian President Mahmoud Ahmadinejad, the language he employs is disturbing in the extreme. It has become a kind of drone, ignored by the mainstream media. It is seen as ridiculous, even silly, or explained away as being misunderstood due to faulty translation.

The truth is that the language is not only disturbing, it has also been deemed acceptable by three Latin American states friendly to Iran: Venezuela, Nicaragua, and Cuba. These nominally socialist states, purely as a result of historical hostility to the United States, have cozied up to a theocracy that deems it necessary to spew hatred toward a specific group - the Jews. 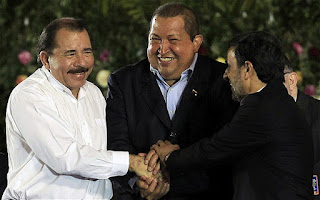 And, though it is not anti-Semitic to criticize Israel, Ahmadinejad takes great license when he calls Israel a "fake regime" that "must be wiped off the map"(or, as per more favourable translations, a “fabricated government” that “must vanish from the pages of time”).

Zionists take many forms. The movement itself has a long tradition. Some are secular socialists, others are more religiously minded. Some are heavily identified with the state of Israel; others see Israel as a concept and not a physical reality, rejecting the notion of a “Jewish state”.

Such subtleties are not lost on Ahmadinejad; he prefers the latter to the former.  But that hasn’t stopped him from referring to Zionists as "the most detested people in all humanity", or calling the mass murder of Jews during World War II "a myth."

Apparently, Ahmadinejad believes that Jews are boosting their claims in order to extort sympathy for Israel. For real: just dial up a genocide so you can get your own country!

And he is not alone. Other Iranian leaders like to get into the fray, too, with the Islamic state sponsoring conferences challenging the historical legitimacy of the Holocaust.

One would think that a good secular socialist would be embarrassed to be seen in the company of a Shia Islamist preaching hate-filled theology. But below is a summary of how Venezuela, Nicaragua, and Cuba are forming an unholy alliance with Iran based exclusively on a shared dislike for the United States.

But Chávez and Ahmadinejad make no secret of their closeness, having pledged “eternal friendship”. They are both fond of posturing, having signed hundreds of agreements between their two countries, mostly to no effect.

Venezuela is almost certainly not mining uranium or exporting it to Iran, as some allege, though there is concern that the Latin American country could help Iran avoid sanctions. The bigger worry is on the military and intelligence side of things.  Quds, the foreign arm of Iran’s Revolutionary Guard, may be active in the Venezuela, with Israeli media reporting that it has a forward operating base there.

There have also been allegations that Iran-ally Hezbollah is involved in cocaine trafficking in Venezuela. The United States Drug Enforcement Agency (DEA) estimates that eighty percent of Colombian cocaine is shipped through the Venezuela. To do that, it needs the assistance of the Venezuelan military. In 2008 Venezuela's defense minister, Henry Rangel Silva, had his U.S. accounts frozen.  He was allegedly aiding the Colombian rebel group FARC traffic cocaine, and may have had ties to Hezbollah. 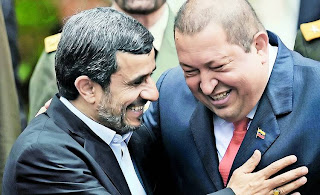 Ahmadinejad and Chavez: all smiles

Nicaragua. Last November, President Daniel Ortega, who led the Sandinista revolution that overthrew the American-backed dictator Anastasio Somoza in 1979, was re-elected in a landslide victory. During his most recent swearing-in ceremony he took the opportunity to mention that Israel was a source of destabilization in the Middle East, while also condemning the killing of former Libyan dictator Muammar Qaddafi. (During the Arab Spring last year Ortega came out in support of his “brother” Muammar Gaddafi). Clearly playing to his special guests Ahmadinejad and Hugo Chavez of Venezuela, Ortega was critical of Israel’s nuclear ambitions but, strangely, had nothing to say about Iran. Meanwhile, Israeli media have reported that Iran has set up and supplied a Hezbollah training camp for thirty terrorists near the Honduran border. At present this is impossible to prove, though the accusation is that the base is used to link up with drug cartels to acquire weapons and launder money.

Cuba. During a one-day visit to the island nation last January, Ahmadinejad said that Iran and Cuba “will be together forever” and that they would continue to fight "to demand the rights of the peoples." The two nations then confirmed their commitment to the peaceful use of nuclear energy.

Why do all this?

To solidify diplomatic alliances outside of the American sphere of influence, to be sure, but also to build the capacity for a counter-strike against the U.S. should Israel attack Iran.

This was stated specifically in testimony to the United States Congress last year, when Gen. Douglas Fraser said that "Iran's proxies have been in the region for enough time to pose a cross-border threat to the U.S. in retaliation for any Israeli strike."

Never before has the saying “the enemy of my enemy is my friend” had more resonance. Secular socialists and Islamofascists team up against the great capitalist Satan, America.

But in all this mix the real danger, by necessity, is Mexico. Cuba is going to keep its hands clean, and the only way for Quds or Hezbollah to move into the United States from Nicaragua or Venezuela is via the U.S.’s porous southern border.

And Mexico itself is in danger, facing a possible attack on U.S. tourists and commercial interests within its own territory. That isn’t as far-fetched as it seems. More on that in our next post.

N.B.: If you are having difficulty submitting to the e-mail feed at the top of this page, press "enter" on your keyboard instead of the "submit" button.
Posted by TimothyEWilson at 19:26