The resort town of Bucerias, Mexico, a few miles north of Puerto Vallarta, was shaken on Tuesday, August 14, when violent gun battles erupted between authorities and gangsters.

Mexican authorities are releasing few details, but it looks like there was a raid on two criminal “safe houses”, which resulted in perhaps one death and three arrests.

The incidents began when a deputy director of the Bahia de Banderas municipal police force came across an armed group. Ricardo Flores Aguayo saw the men in a fenced area behind the Arroyos Verdes (Green Streams) neighbourhood. He called in a request for support, which resulted in a shootout, with armed gangsters fleeing the scene.

This shootout was against approximately ten subjects. When the gangsters saw more police coming, they fled up a hill, drawing municipal agents to near the landfill at Arroyos Verdes. Here the authorities were apparently able to make one arrest.

At about 2:30 pm another call came in reporting that armed men were seen near a farmhouse guarded by patrols around the old road to Valle de Banderas.

The police began to put together a response team, but arrived at the scene after most of the gunmen had fled, though they did manage to make their second arrest here.

At the farm they confiscated rifles, fragmentation grenades, and tactical vests, as well as a late model Ford pickup truck. The farm, according to some reports, was being used as a place to “train assassins”.

One local who was working in the Biblioteca Rey Nayar (link includes map), a library sponsored by the expat community, heard the gunfire. Apparently, the shootout went on for an extended period of time. 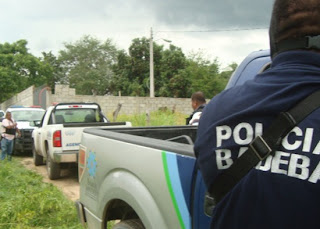 Outside the "finca" (farm/ranch)

It appears both State Police and the State Investigation Agency were unhappy with reporters at the crime scene, telling them to “fuck your bitch somewhere else!" According to the Mexican press, however, the reporters refused to leave the site.

Then the Mexican Army and Federal Police showed up, and began an aggressive search for the gunmen around Bucerias, particularly in the Arroyo del Indio and Javier Francisco Ovando neighbourhoods.

There was no major police presence in town or near developed tourist areas. The events themselves took place near the municipal landfill. Many residents in Bucerias saw no signs of police within their neighbourhoods, and felt at ease given that the shoot-out occurred out of town, along a country road toward the town of Valle de Banderas.

That said, a perimeter was set up around the town, and the criminal courts were closed. Municipal authorities in Puerto Vallarta set up watches for entrances and exits to the city and the state of Jalisco, which borders nearby Bucerias in the state of Nayarit. It is questionable how effective and visible this effort was, as some residents are reporting that they saw no evidence of it.

Incredibly, at 8 pm there was another clash with an armed group, this time involving tourist police and the Mexican Army, near where the initial sighting took place. It is thought that this could be the same group that was seen by Mr. Flores Aguayo earlier in the afternoon.

There are indications that this encounter was due to an investigation after an individual was stopped and searched in Bucerias. This then led to a second farm, where the armed group was found and confronted.

After this encounter, there were rumours that the police and military had managed to kill one of the gunmen, and make a third arrest.

None of this information is “official”. Authorities were apparently so tense that they were even yelling amongst themselves, as well as trying to prevent the media from doing their own reporting.