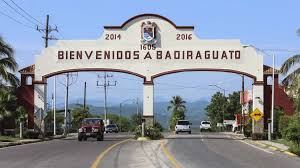 Rafael Caro, 65, has been on the run for five years, and is something of a legend in Sinaloa. Back in the 1970s he controlled the now-defunct Guadalajara Cartel, but ran afoul of US authorities for his alleged involvement in the kidnapping and murder of DEA agent Enrique (“Kiki”) Camarena Salazar. Then in 2013, a state court in Jalisco released Caro on a technicality – possibly as a result of a corrupt process – thus enraging the US government. He is now wanted in both the US and Mexico.

“We know that he’s still around here, and that’s why we’re continuing [our operations] in the area, because the order is to catch him dead or alive,” said a local Marine on patrol in an interview with the Sinaloa weekly, RioDoce. “How are we going to take him? That’s up to him.”

The towns are in the Badiraguato Municipality, home of Sinaloa Cartel kingpin Joaquín "El Chapo" Guzmán, who is now in custody in the United States. El Chapo’s partner, Ismael Zambada García, is also from this part of Sinaloa, and still at large, with the FBI offering up to US$5 million for information leading to his capture.

But it seems to be Rafael Caro that the government has its sights on. According to eye witness accounts from locals, the Marines first arrived on March 7, rappelling to the ground from Black Hawk helicopters. The soldiers then proceeded to violently force their way into houses in search of Caro.

“We were shoeing cattle when out of nowhere we had two helicopters above us, and within seconds we were surrounded,” said one villager. “They were pointing [guns] at our heads and asking us where Don Rafael was.”

As the men were held, other Marines went to the home of Caro’s mother, smashing padlocks and breaking down doors in search of the drug lord. The locals claim that weapons were pointed directly at their heads, with a soldier saying –

“Look, you sonsofbitches, now you’re going to tell us where your boss is, because the order is to bring him in dead or alive.”

These and other accusations have been widely confirmed by residents of Babunica, including by Erika Serrano, the security officer of the local ejido (agrarian community), who claims to have received numerous complaints. These include robbery, physical and psychological abuse, and – in some cases – death threats.

“We know they have to do their jobs, but they don’t have to mistreat the people, and at the very least they shouldn’t be sowing terror among us,” says Serrano. “The people have no obligation to tell them where this man is, even if they know.”

Serrano is correct. Under Mexican law, there is no legal obligation to disclose the whereabouts of an individual, even if that person is wanted by the authorities.

But does the average Mexican soldier even know the law? Mexico’s militarization of police activity has resulted in widespread abuse, in part due to a culture of impunity, but also because soldiers lack basic police training with regard to civil rights or the collection of evidence.

In the state capital of Culiacán, activist groups such as the Sinaloa Civic Front (Frente Civico Sinaloense, or “FCS”) and the Commission for the Defense of Human Rights (Comisíón de Defense de los Derechos Humanos, or “CDDHS”), have confirmed that in the last two weeks they’ve received dozens of complaints from residents in the area.

“It’s worrying that this is now happening in the mountains around Badiraguato, because this isn’t the first time that we’ve seen these kinds of abuses by the Marines or the Army,” said Miguel Ángel Murillo, who is in charge of legal affairs for FCS.

Murillo says that the abuses of power include “hitting people, stealing from them, sowing fear.” He claims that the FCS now has a binder full of such complaints which will be sent on to the National Commission of Human Rights (Comisión Nacional de los Derechos Humanos, or “CNDH”).

The Marines deny any abuses – or even that they are on the hunt for Rafael Caro, with the Secretariat having communicated to RioDoce that, “Up until now, we have no information to confirm that we’re actively looking for drug traffickers in that area.”

But first hand interviews with Marines would suggest otherwise.

“We followed him here – that’s what I can tell you,” said one of the soldiers, interviewed by RioDoce in Las Juntas. “We’ve closed all the roads and strategic locations, and it will be difficult for anyone to leave here without us knowing about it.”

The operation began around five in the afternoon on March 7th. The Marines arrived simultaneously with six Black Hawk helicopters. Two helicopters descended on each of the three villages of Babunica, La Noria, and Las Juntas. For the locals, the surprise was that the helicopters were so quiet. The Marines appeared to have planned the attack well in advance, using the surrounding mountains to obscure their approach. Such coordination makes the alleged human rights abuses all the more problematic.

“They already had us surrounded when two marines grabbed me and tied my hands,” said one resident. “They asked me where Don Rafael was, that I must know where he was, and then they began to beat me in the backside and legs with a board until I was bruised.”

During the operation the Marines rounded up the residents of the three villages, including their vehicles, and decommissioned the radios. There is no cellular service in the remote area, and locals claim that the radios are necessary for them to communicate amongst themselves.

More disturbing are alleged threats of sexual assault. A woman from the small village of Guanajuato, Sinaloa, also in Badiraguato Municipality, was attending to her roadside stall when she was allegedly threatened by soldiers.

“I told them that I don’t know anything about this,” she said. “Then they yelled at me not to be so stupid, that they knew I was providing food for him [Caro], and that if I didn’t cooperate they were going to rape me.”

Two weeks later, the Marines are still in the area, with no sign of Rafael Caro Quintera.