Violence continues to rage in Acapulco as six more die

May 30. The violence in Acapulco is continuing, with at least six people having been killed in the early hours and morning of May 30, according to official reports.

Included among the victims are a newspaper employee and two women and three men. The dead were riddled with bullets, with “narcomessages” left on their bodies, suggesting that the violence is related to ongoing gang disputes. 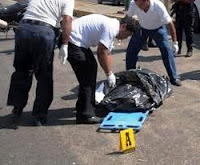 Three of the bodies were dumped in black bags

The violence was spread throughout the city, including a severed head that was left at the Marina Beach condominium complex in the exclusive Diamond Zone.

At 4:44 a.m. on the morning of Tuesday the 29th a man was executed at an Oxxo store (a Mexican 7-Eleven) at the corner of Constituyentes and Cuauhtémo avenues. This is in the heart of the city, only one block from the Miguel Alemán coastal road.

The victim was identified as Samuel Martinez Ramirez, 32, who worked as a delivery driver for the local Novedades Acapulco. He had been shot by a .45 calibre handgun: once in the neck, once in the right eye, and twice in the right arm.

According to eye witnesses, two gunmen entered the Oxxo store and directed fire against the worker, who was delivering newspapers at the time. 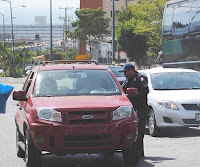 Then, at 7 a.m. the dismembered bodies of three men were found in black bags that had been thrown in an area known as Paso Texca, where there is a landfill that has become notorious as a dumping ground for corpses.

Two of the dismembered victims were identified as Pedro Torres Miranda, 27, and Gilberto Mejia. The third remains unidentified as the body had no head or arms.

The killers left a “narcomessage” in the name of the Beltrán Leyva brothers, claiming that the cartel was active in Acapulco and warning its enemies to back off.

Previous to this discovery, in the morning of the Tuesday the 29th the bodies of two women were found near the town of Dos Arroyos (Two Creeks). The victims, aged between 18 and 25, were wearing blue jeans and black tops and had multiple .45 mm bullet wounds.

In recent days, taxi drivers have been targeted, and Tuesday the 29th was no different. A driver and a civilian were wounded when fleeing from a taxi stand. The “Urvans” stand was for taxis heading off to the “Costa Chica” municipalities.

The incident occurred around 3:30 in the afternoon. Gunmen arrived at the scene and shot up the taxi stand, which is located in the Las Cruces neighbourhood on Lázaro Cárdenas boulevard.