As part of the case against those accused of plotting to smuggle Saadi Gaddafi from North Africa to Mexico, authorities have argued that Mr. Gaddafi, his wife, and two young children were to be placed first at the luxury St. Regis hotel and condominium complex in Mexico City.

To support their argument, the Mexicans are relying on an alleged email, supposedly leaked by “Anonymous”, between two former marines, Greg Gillispie and Michael Boffo, in which Mr. Gillispie allegedly says that millions of dollars could be made offering close protection to a family of four at the St. Regis.

Mr. Gillispie, a former principal of security training company Veritas Worldwide Security, is the owner of GG Global Holdings, a San Diego-based aircraft leasing company. This company contracted aircraft from Christian Eduardo Esquino Nuñez out of Toluca, Mexico, for use by Cynthia Vanier. Cynthia Vanier is the Canadian accused of organizing the alleged plot while under contract to the troubled Canadian engineering giant SNC-Lavalin.

Mr. Boffo, a former employee of military contractor DynCorp, was a close friend and business partner of Mr. Gillispie’s at Veritas Worldwide Security. He is presently employed by Pax Mondial in Afghanistan.

Mr. Gillispie has been very open to La politica, claiming that the Mexican authorities have confused a legitimate plan to secure the family of a Mexican politician with the alleged Gaddafi plot.

Mr. Boffo has also responded to queries from La politica, and has clearly stated that he had nothing to do with such a plot.

One unusual aspect of such a plan would be the requirement that Americans carry weapons in Mexico. This is against the law. Any plan to offer close protection would then involve the Americans in an advisory role, or operating in serious contravention of Mexican gun laws.

La politica has built a list of some of the men who may have been contacted to provide close protection at the St. Regis, and perhaps then later on as well, should the family have been relocated to a compound on the Pacific Coast, as the Mexicans allege.

The list provided below does not specifically identify the individuals for a number of reasons.

First, all have been contacted by La politica, and not one has been able to confirm or deny that they were approached for a close protection security detail in Mexico. Their silence may be due to NDAs, a desire not to put at risk their security clearance, or a fear that they would be compromising personal loyalties.

Second, they have done nothing illegal that La politica is aware of, and have not consented to having their identities revealed. 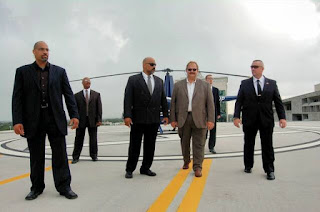 Not the gentlemen referred to in this article

Nonetheless, below is a partial roster, as best as La politica has been able to determine so far:

CP #1. Born 1968 and based in Atlanta, this former DynCorp and Blackwater employee in Iraq is a big Georgia Bulldogs and Southern Eagles fan, and rightly mourned the loss of Larry Munson. He is also fond of tennis star Anna Kournikova (no harm in that).