The rule of thumb in Mexico, as in most countries, is that the higher up you go the less compromised, and less corrupt, the police services are.

Mexico’s federal police are supposedly cleaner than the state forces, which in turn shine brighter than the municipal cops. By comparison, in Canada the RCMP sets the national standard, as does the FBI in the United States.

But sometimes even the crème de la crème falter. When that happens, we have examples of corruption, harassment, falsification of evidence, perjury...the usual hanky panky. In Mexico, however, as one commentator so aptly described it to La politica, sometimes “This is next level shit.”

So, as we hear news of a report confirming that the death last year in a helicopter crash of Mexico’s Interior Minister, Blake Mora, was due to pilot error, and that Mexico’s City’s airport is now cleaned up from police corruption after this last summer’s shoot out, so too do we hear that federal law enforcement is, yet again, in renewal mode now that 14 federal police officers have been charged in last August’s attack on CIA officers.

In that daylight attack – near the town of Tres Marias, south of Mexico City – a US embassy SUV with two CIA operatives was riddled with 152 bullets. Presumably, the orders came from a drug cartel. The wounded officers have since returned to the United States. 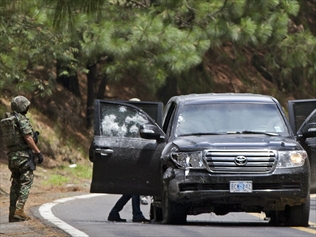 To the credit of Mexican authorities, they did not hide behind initial suggestions that the attack was a mistake and, perhaps, a case of mistaken identity. It was, significantly, the Mexicans who decided that the use of AK-47s, and the fact that the assailants were not wearing uniforms, pointed to a well-orchestrated hit.

The 14 officers, who come from the southern Mexico City district of Tlalpan, are all now charged with attempted murder. One of the federal officers is also charged with making false statements, with five others being accused of covering up the attack. The 14 were also charged with property damage.

The off-duty officers were in private vehicles when they attacked the agents’ Toyota Land Cruiser, bearing diplomatic license plates.  The agents were travelling with a Mexican navy captain to a military training camp south of the capital.

Of concern is the sheer size of the conspiracy. To have 14 federal officers actively connected to organized crime to such an extent that they open fire on a US embassy vehicle in the heart of the country is mind boggling.

If this is what the federal police are capable of, then what on earth is going on at the state and municipal levels? Of course, La politica, as well as a wide range of Mexican media outlets with an eye on local corruption, know the answer all too well. In Mexico law and order and justice are in play, available to the highest bidder.